This all began with me stumbling across, on one of those dubious movie streaming sites, a Chinese film with the clunky title, Escape of Shark. Viewing it, I found something which played a bit like an upscale, Asian version of a SyFy original movie. I presumed at the time that it had been inspired by Jason Statham shark film, The Meg, which was very heavily targeted at – or, pandering to, if you prefer – the Chinese market. Either way, it worked, grossing over $153 million there, on its way to more than half a billion dollars worldwide. But it turns out, the truth was rather more complex than that.

While looking for pictures to illustrate the review, I ended up going down a bit of a rabbit-hole of Chinese rogue animal movies, and discovered just how many of them exist, and are available online. The Netflix, Hulu and Tubi of China, are Tencent, Youku and iQiyi, and they are no less hungry for content than their Western counterparts. To give you some idea, between those three services, over the fortnight of the Chinese New Year in Jan/Feb 2020 – just as Chinese cinemas closed for COVID – they released more than forty movies, albeit across all genres. Things haven’t slowed since: just as the pandemic has increased the appetite for streaming here, the same is true in China.

All three of the services have a presence of YouTube, but understandably, expat Brits in Arizona are not their target audience. While iQiYi have just over 4 million subscribers, they seem to treat YouTube as a promotional channel for the app needed to watch their content. Tencent have even more, with 6.46 million subscribers, but subtitle only a fraction of their content, and on a casual search, that appears to be costumed romance/dramas, of little interest. And that’s even though I speak as someone who happily vacuums up lengthy Mexican narconovela shows like Senora Acero.

Which brings us to Youku. While they may be the smallest in terms of subscribers, at 3.16 million, they put the most effort into letting their content be enjoyed by non-Chinese speakers. That they have a separate channel for their movies is particularly appreciated, and it’s there I struck the mother lode of these films. This included the one which, it can be argued, started the trend for this kind of straight-to-streaming animal attack content, 2018’s Snake, directed by Lin Zhenzhao. It was the first movie released online to turn a profit of more than 50 million yuan, about $8 million. While that may not seem much, its producer Yin Chao said it was a greater return than 78% of theatrical releases that year. 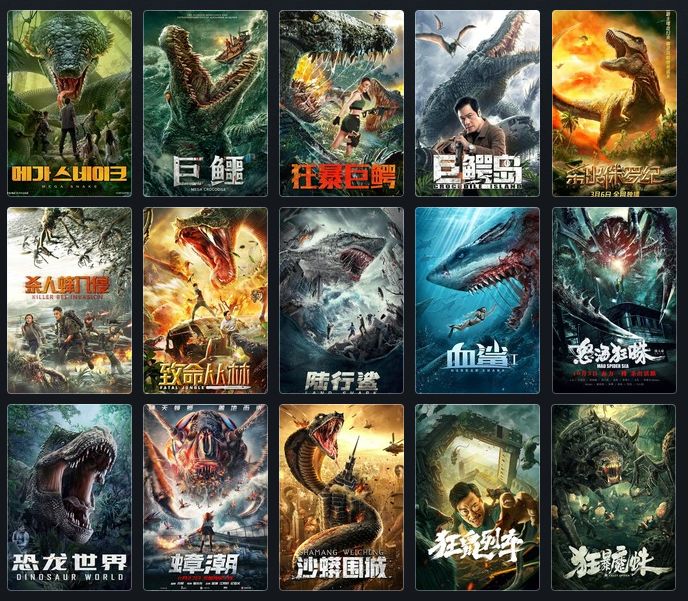 He went on: “We made Snake based on our analytics. While there are many foreign movies like King Kong and Jurassic Park, there’s no such genre in China.” Well, I think it’s safe to say, if Youku is any guide, that four years later, that is no longer the case. As mentioned, at first sight, they may seem no different from SyFy Original Movies. Yet there are differences. The production values are notably better, first of all. The budgets may not necessarily be much larger; they just go considerably further in China, which apparently has unlimited resources in both wilderness territory and CGI animation. That foreign setting alone, brings a fresh flavour to things: there’s no chance of Dean Cain or Casper Van Dien showing up in these. It’s just another culture, and that alone adds interest.

These also do not hang around, for purely commercial reasons. For instance, on the iQiYi app, you need a membership to watch past six minutes, and need to hook your audience quickly, so they’ll pony up for a subscription. Wei Junzi, another producer working in the field, said “Ng See-yuen used to say it didn’t matter if a  movie was bad at the beginning, as a cinema-goer will sit through it after paying for the ticket… Such thinking can’t work for online movies.” These are entertainment machines, intended to separate the viewer from their money. While there may be occasional nods to patriotism – the Japanese are almost always bad guys – they’re well short of the jingoism in some Chinese theatrical releases.

One area where they’re a throwback to classic B-movies is in posters which are rarely less than gorgeous. Long time cult writer Scott Weinberg said he was “obsessed with the artwork”. Even though some of the examples he provided (above) are from elsewhere in Asia, he’s not wrong. Admittedly, the films rarely quite live up to the posters: the movie monsters are typically not as large or threatening as they appear in the advertising. But the posters are so luscious, it seems wrong to condemn them on the basis of factual inaccuracy. Just imagine, to get old-school, going into your local Blockbuster and seeing those as sleeves on the shelves.

I don’t see any reason why the stream of these should stop anytime in the near future, providing they continue to make money. There’s no denying their popularity on YouTube, which alone potentially creates enough revenue to fund a good percentage of productions. Snake Girl has 5.8 million views there, Land Shark is at 6.6 million and Horror Shark over eight million. But they all pale beside the reigning monarch King of Snake, currently sitting just under thirty million views. And with Meg 2: The Trench starting to film just last week, it seems likely there will be no shortage of further creature features coming out of the lesser Chinese studios, happy to swim in the wake of its bigger budget.

Over the month of February (and perhaps slightly into March!), we’re going to be reviewing as many of these films as we can find with our grubby search engine fingers, and links to these will  appear below, beginning with the Patient Zero of this outbreak, Snakes. Under those, you’ll find a playlist containing – depending on your location – over twenty, English-subtitled entries in the genre from Youku for your amusement.