The opening 25 minutes of this are as good as any creature feature you’ll see, Western or Chinese, and would be a fitting climax to many movies. Set in pre-war China, it takes place on a train returning doctor Jing Lan (Kang) to the rural community where she grew up. On board with her is her boyfriend, soldier Mao Sho Yang (Shao) and a local snake expert, Mu Sheng (Chen). Fun fact: snake bone wine is apparently a thing in China. I’ll be sticking to Merlot. Mu’s presence is convenient, since the train grinds to a halt and seconds later, comes under assault from a tidal wave of slithering reptiles. Imagine Train to Busan, with snakes instead of zombies, and you’ll be about there [and, yes, it took Chris three seconds to make a “snakes on a train” joke]. Leading the assault is a monster with two heads; unsurprisingly, the humans decide to go off the rails and head on foot for Jing’s village. 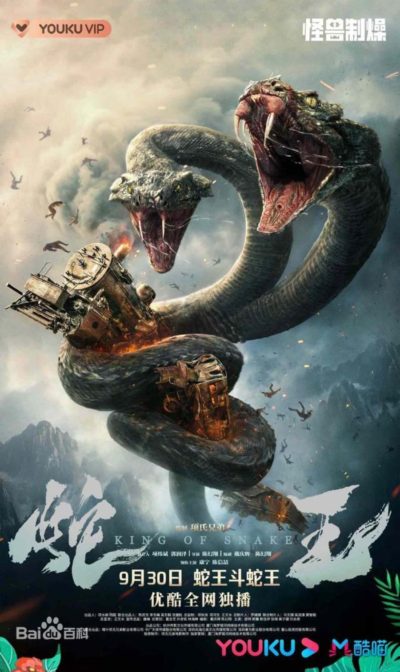 It’s an awesome opening, relentless and high-energy – albeit still not as cool as the poster (right). Shame the rest of the film is much more prosaic. When they arrive, Jing and pals find the community was recently destroyed by the same creatures, who have been driven out of their natural habitat by man’s encroachment. To heal the victims of the poisonous bites, a mission must be sent into Snake King Valley, to obtain the rare ingredients needed for an antidote. This kind of expedition-based movie is hardly novel in the genre, and things unfold much as you probably expect the rest of the way. The two-headed snake is not seen again until the very end. Instead, the party have to handle other threats such as venomous spiders (lots of little ones, rather than Shelob-sized), a water anaconda, rickety bridge, etc. It’s standard jungle survival stuff, and is a bit of a disappointment after the frantic imagination at the start. Though we did appreciate the malicious little person, Sorrowful Snake, they encounter deep in a cave. Unexpected midgets are tight.

I kept hoping for a return to the large-scale mayhem; it never quite gets there, though has its moments. I must also say, the king of snake (plural optional, apparently, and in line with the spelling of the Underworld song) is remarkably light on its… ah, ribs, for something that must weigh at least the same as an armoured car. It can sneak up and lurk behind victims at will, pausing just enough for the required “It’s behind me, isn’t it?” moment (top). Though director Chen never lets it linger too long, which may be a wise move if you’re not confident in the effects. Can’t say I noticed any particular flaws, though it is moving quite quickly much of the time. Decent enough overall, yet after the glory which was the start, I can’t help feeling this must count as a lost opportunity.