With a title which translates as The Inn of the Gruesome (or Bloodthirsty) Dolls, it feels as if someone in Germany had seen Faster Pussycat, Kill! Kill! and decided that what their country needed was their own version. Albeit set, for some reason, in the Scottish Highlands, or a not very convincing facsimile thereof. Coincidentally, while watching this, I was on the train to Aberdeen, and passed about 40 miles from Balmoral, the supposed home of the “Penitentiary for Women” in this. Hey, at least Balmoral exists, unlike Sheephelm, the small village which is the main location. 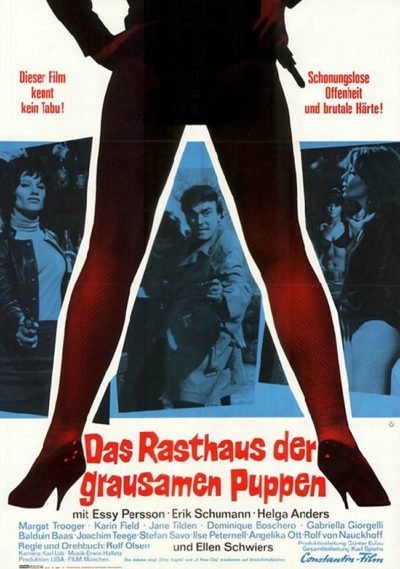 But such concerns should be secondary to most viewers; they were clearly secondary to the makers. This is the story of Betty (Person), who is arrested after a badly botched robbery with her boyfriend, Bob (Schumann). He escapes, leaving her to take the fall, and because a policeman was killed by Bob, she gets ten years. However, barely has her sentence begun, when Betty stabs the lesbian head warden – the amazingly named Frau Nipple, I kid you not. Stealing the prison keys, Betty and a group of other inmates bust out of the doll house and go on the lam. Her goal: reunite with Bob, who is working at a remote inn in Sheephelm.

Except, it’s not quite that easy, various complications ensuing. Some are self-inflicted, such as a poorly conceived plan to kidnap a rich businessman’s wife and hold her for ransom. Others are just unfortunate: one of the group, Linda, never wanted to escape to begin with, and Bob has moved on, so is rather disconcerted to see his supposedly jail-bound moll, suddenly show up. As Betty, Bob and the girls seek to evade capture, things spiral out of control, with dead bodies resulting and having to be stuffed in the freezer, etc. Fortunately, the local copper might we’ll be named P.C. Oblivious, for his lack of law enforcement instincts.

It’s all quite dubious, often to the point of laughable. We reach a peak where the local busybody runs, screaming, through the inn, before falling backwards out of an upper-story window to her doom. On the other hand, it’s certainly never dull, building towards a frantic climax, after another kidnapping, this one of a small, disabled child. However, the film still falls short of cult classic status, probably due to the performances, because these are more functional than memorable.

The movie is built on the kind of material that needs a Tura Satana or Meiko Kaji to sell it, papering over the cracks with sheer force of will. This only occasionally succeeds in brushing against that level of commitment – oddly, more so at the beginning. Matters there are helped by a super-cool rocking opening theme, apparently called ‘Dirty Angels’, composed by Erwin Halletz, and performed by Don Adams. “Crime doesn’t pay,” goes the repeated refrain, and the eighty minutes which follow, should do a good job of reinforcing that moral.