We end – for now! – with a movie released last month online, as a follow-up to Snakes. Just do not ask me what happened to Snakes 2. It does not appear to have appeared in the West, though I cannot tell you this impacted my appreciation of part three. This works well on its own terms, mashing up elements from the Jurassic Park franchise with ideas of its own… and also, bizarrely, When Dinosaurs Ruled the Earth. As the title suggests, there are two main gigantic beasts. However let’s not forget the giant killer frog, or the pack of Indominus Rexes (Rexii?). Yes, the fictional T. Rex/Velociraptor cross from Jurassic World, gets a supporting role here – I suspect without any royalty payment. 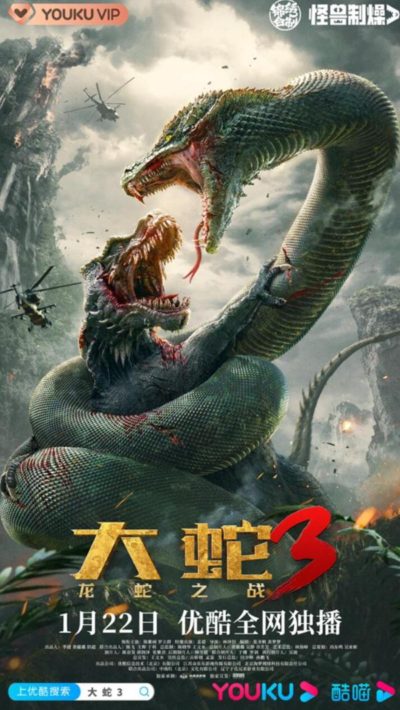 It takes place on an island which is being converted into an ecological theme park. Blasting frees an enormous snake and a huge carnivorous dinosaur. Meanwhile, elsewhere on the island, a tour group gets stranded after their bus crashes. It’s not long before the group, including driver Zhang Yang (Luo), and single mom Xiao Nan (Chen), with her little son Kai, are in trouble. Kai wanders off on a toilet break – I’ve learned in this series those never end well – and is separated from the rest of the party. He wanders into the megasnake’s nest, ending up hiding from an oviraptor in a broken snake egg, where he gets covered in yolk. I have questions about this: was the released snake already pregnant or something?

Anyway, with Kai smelling of baby reptile, Mommy snake kinda takes him for one of her own, especially after he goes full Androcles and removes a thorn from her side, defending the child until his human mother shows up. Although Mommy snake is apparently killed by the Indominus Rexes, we all know that’s a fake-out. We’re not leaving the building until we get the inevitable fight between her and the “King of Indominus Rex”, as promised in the poster. While we have seen this in Varanus Priscus, this is the first case where the film goes full kaiju, making the monster sympathetic, instead of a relentless threat. Given its maternal leanings, the snake feels like a spiritual cousin to Mothra, which is an appreciated influence.

Though to get there, we do have to go through the scene where someone is literally shat on, in copious quantity. While I know the Chinese are fond of toilet humour, this was rather beyond Laura Dern going up to her elbow in dinopoop. Otherwise though, this is a swiftly-moving and entertaining movie, with decent enough effects for the job. While the twist discussed in the previous paragraph is definitely a reach in terms of credulity, given the nature of the film in general (I mean: giant frogs called Beelzebufo?), I can’t complain. The film does enough to make it possible for the viewer to buy into the conceit, and I was left genuinely looking forward to Snake 4.