After a couple of underwhelming entries, it was nice to get back to competence. While this is nothing particularly special, it is brisk enough to be entertaining, and that helps balance out effects (and characters) that sometimes aren’t up to the task. After a prologue set in WW2, with a couple of crashed airmen coming to grief, we get to the main course. A film crew has descended on the same, remote island in order to make an action film. But the explosives used in a special effects scene, blow open the underground cave in which the title creature lives. And what is a Varanus Priscus, I hear you cry. 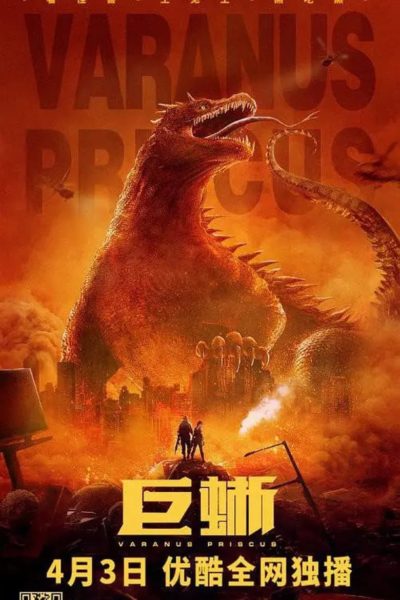 Per the Wikipedia, it was the largest land-going lizard ever to have existed, an extinct species of giant monitor, up to 23 ft in length. It inhabited Australia during the Pleistocene, and is believed to have been around when the first Aborigines arrived. They may have been a factor in its eventual extinction: now, that’s a movie I wouldn’t mind seeing. The one here is likely even larger (though not so gigantic as the poster!), with a long, prehensile tongue and infinite appetite. It’s not the only threat on the island either. The crew will have to fend against flesh-eating bugs, as well as an equally large snake. If you’re hoping for a snake vs. Varanus fight, you do get this (top), though it’s not quite the spectacle I wanted. You do learn by the end which is more lethal: one giant snake or a thousand regular-sized ones.

This works best when things are in motion. Li has some nice tricks, like making the camera shake when Varanus walks past. The more you get the chance to look at the effects though, the less credible they are. Still, the problems here are more on the human side, who are almost entirely forgettable. The hero is crew member and ex-soldier Cao Yue (Yuan), with assistance from actress Su Qiaoqiao (Shi). Of course, there’s a fly in the ointment, in the shape of producer Song, who is prepared to sacrifice anyone and everyone else, in pursuit of his goals. “I hope he gets eaten in the worst way,” muttered Chris. As opposed to being eaten in the best way, I guess?

It doesn’t help that the people aren’t exactly the sharpest tools in the box. There’s no reason for them to go a-wandering off into the depths of a cave. Except, they do anyway. It goes about as well as you would expect. As a result, you don’t feel much for their plight, even when they are mixing a few household chemicals in the proper proportions, to create an impromptu minefield. This has more in common with mid-tier kaiju films, where the human characters are just place-holders between the monster appearances. You’ll be forgiven if your attention slips during their heartfelt discussions, emoting and fistfights. However, the giant lizard and F-sized snake are personable enough to make for a reasonable watch.