Over the past few years, there has been a not very stealthy effort to resuscitate Jennifer’s Body, the 2009 film written by Diablo Cody and directed by Karyn Kusama, staring Megan Fox and Amanda Seyfried. At the time it was released, it was a commercial and critical failure. But beginning in late 2018, we have seen a steady stream of articles with titles like ‘You Probably Owe Jennifer’s Body An Apology” or “Why It Took 10 Years for Jennifer’s Body to Get Any Respect”. The basic idea is that the film was simply ahead of its time, and deserves to be re-assessed in the #MeToo era.

So, I re-watched it. And I’m here to tell you that more or less all the problems which informed my original review are still problems. The only way it can genuinely be said to be ‘ahead of its time”, is in being shitty, woke horror before shitty, woke horror was the virus it has become. Yes, social commentary has always been part of the genre. But for every film which does it right, like Get Out, there are far more turds like the Black Christmas remake, which sacrifice the movie to the message. That aside, this remains a horror comedy which is a dud on both sides of the equation. Let’s review the problems in more detail.

First off, both actresses were 22 when the film was made. That would be older than most college students, never mind high-schoolers, and they’re getting perilously close to Olivia Newton-John in Grease territory. Neither of them look credible. Contrast the films to which Body can be most directly compared. Katherine Isabelle was 17 when she started shooting Ginger Snaps, and Winona Ryder just 16 when Heathers was filmed. That’s a very significant difference. 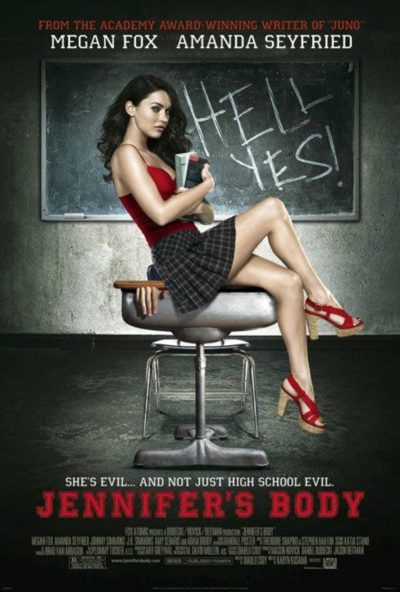 I do give Fox credit for working at her craft. She has actually become a decent enough actress, at least capable of holding her own in the right vehicle. But at this point in her career, Megan’s feature filmography was basically being a sexy clothes-horse in two Transformers film, before she got canned for comparing Michael Bay to Hitler.  You do not learn the craft of acting on the set of Transformers, and the lack of meaningful experience shows in Fox’s performance here.

With Seyfried, the problem is less her performance as Needy than her innate unsuitability for the role of a “plain Jane.” As so often happens, this film lazily thinks that lobbing a pair of spectacles onto someone, turns them into an ugly duckling. Uh, no, especially when you’re coming from a Seyfriedian level of attractiveness. Amanda isn’t an ugly or even regular girl. She’s a pretty one in glasses, and you can’t get past that. The notion that her character would be insecure, requires considerably more work before anyone is capable of buying into it.

I originally criticized Kusama for having no apparent interest in the horror genre. That does deserve a reassessment, because since Body, she has made one horror film, The Invitation, contributed to another, the anthology XX, and was last heard of working on a Dracula story for Blumhouse. So the director clearly has a darker side.

However, perhaps the main flaw here is a complete inability to sell the relationship between Jennifer and Needy. I have seen a number of pieces with writers saying they had friendships ‘just like that’. But it should not be necessary to have experienced a ridiculously toxic relationship to get it. Good film-makers can make things feel ‘real’, regardless of viewer history. For instance, in Basic Instinct, you understand the nature of the relationship between Catherine Tramell and Nick Curran, without needing to be either a thriller writer or San Francisco detective.

That isn’t the case here. In particular, it’s never clear what Needy gets out of her friendship with Jennifer. They are such disparate characters it’s hard to see them hanging out together [when our daughter was a teenager, her friends were like clones of her, with interchangeable heads]. The ‘friends since childhood’ thing feels like more sloppy film-making, an excuse in lieu of putting in the work to build a relationship. This is especially true at the end, where Needy is given no motivation to go after the band. Why would we she want to take revenge on behalf of the woman who killed her boyfriend?

Who? That’s the real identity of Diablo Cody, whom I have no issue at all with dead-naming, and whose wretched excuse of a script is far and away the biggest problem here. Mind you, I was at least able to sit through all of this, which is about 80 minutes more than I managed of Juno. I have much the same issue with her writing as Quentin Tarantino’s. I cannot listen to his dialogue without hearing it coming out of his coke-addled rat-face. He doesn’t create characters, just chatty versions of himself. The same goes here. Cody’s dialogue is of the kind politely referred to as “stylized,” which actually means, nothing like it would ever come out of a real person’s mouth. I mean: “You’re lime green jello and you can’t even admit it to yourself”? What the actual hell is that supposed to mean?

The story doesn’t make sense, with plot holes you could slide a tanker (or Cody’s ego) through. For example, the Satanic rock-band need a virgin for their sacrifice… yet do they choose the nerdy, bespectacled and insecure girl? [Look at the top picture, and play Hunt the Cherry] No. They go for the cheerleader, literally picking Megan fucking Fox – in the words of Ryan George, so the film can happen. The same necessity drives Jennifer going from being a whip-smart manipulative bitch, into someone led like a sheep into a grungy van and driven off, without Needy bothering… oh, I dunno, to tell anyone in authority. Indeed, where is anyone in authority? Parents? Police? Hello?

Post-possession, Jennifer’s character arc consists of her going from a bitch, to a bitch who eats people. That’s it, folks. It’s amusing to see her now touted as an icon of female empowerment, when she drops what would be condemned as slurs by the PC Police under other circumstances: “Please don’t talk to yourself… it makes us both look like total gaylords.” So cool! Especially, when followed up seconds later with casual racism: “You need a mani bad. You should find a Chinese chick to buff your situation.” Hilarious!

4. No, it wasn’t the marketing 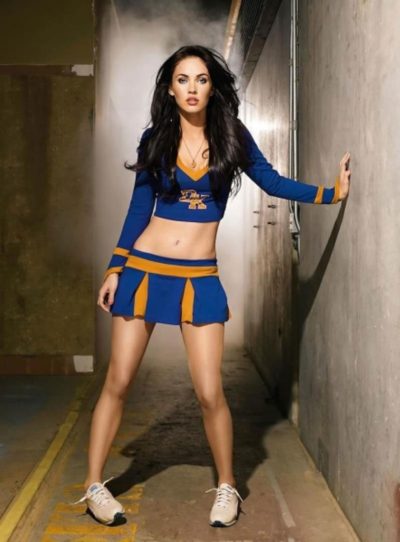 Ms. Maurio has whined incessantly about how the studio sold the film. “Because of the way the film was marketed, people wanted to see the movie as a cheap, trashy, exploitative vehicle for the hot girl from Transformers.” Ah, if only it had committed to being trashy and exploitative [at $16 million, it was hardly cheap, despite looking like a bargain basement Shudder Original], in line with the publicity photos for which Fox posed (left). The writer’s comments might have explained a big first weekend, followed by a sharp drop-off, as usually happens when hype exceeds reality.

But the movie bombed right out of the gate. It finished only fifth on its opening weekend, behind the likes of Love Happens. The reality is, horror-comedy is a hard sell, especially with an R-rating. Far better movies in that genre have done much less, e.g. Shaun of the Dead. In the past 15 years, just one has reached $50 million at the US box-office: Zombieland. A horror-comedy which was actually both horrific and funny, did better than one which was neither. Who could have guessed? But, no: the advertising was to blame!

Had it had been pitched at teenage girls, as Cody and Kusama wanted, I suspect the teen girl lesbo gore fan market would have been just a tad niche for it to achieve blockbuster status, especially given the rating. Though its fans are certainly… um, a dedicated bunch. That’s a polite way of saying “scary AF”, since they tend to stan Jennifer the demonic serial killer. When social media comments about the film such as, “If I had a friend who was terrorizing men, I would help her”, receive almost 100,000 likes… Yeahnah, that’s creepier than anything in the film. If you have any doubt, just swap the sexes in that problematic statement.

The film is often touted as a reversal of the “sexist” horror trope of men killing women. But this is largely a straw man to begin with. In most popular slasher films, the killer is equal opportunity: Freddy, Jason and Michael don’t discriminate by sex. When they aren’t gender neutral, they typically are not portrayed as heroic or laudable. Buffalo Bill in Silenve of the Lambs, for example, is a pathetic figure. [Oh, hang on, that’s transphobic now, isn’t it?] While nominally couched as the villainess of the show, Jennifer is portrayed in such a way it’s clear the makers’ loyalties and sympathies largely lie with her, as demonstrated by the audience reaction discussed above.

What makes this troubling is the way most of her victims are innocent. Going after the rock band would have made sense, as those directly responsible for her situation. Taking out predatory men would be fine too. But Jennifer doesn’t discriminate by nature either: neither the jock. the goth or Needy’s boyfriend have done anything to deserve becoming a buffet. Simply possessing testicles is enough (sorry, is that transphobic too? I haven’t been keeping up on my woke qualifications). She should be as distasteful a figure as Buffalo Bill, rather than available on a range of T-shirts. 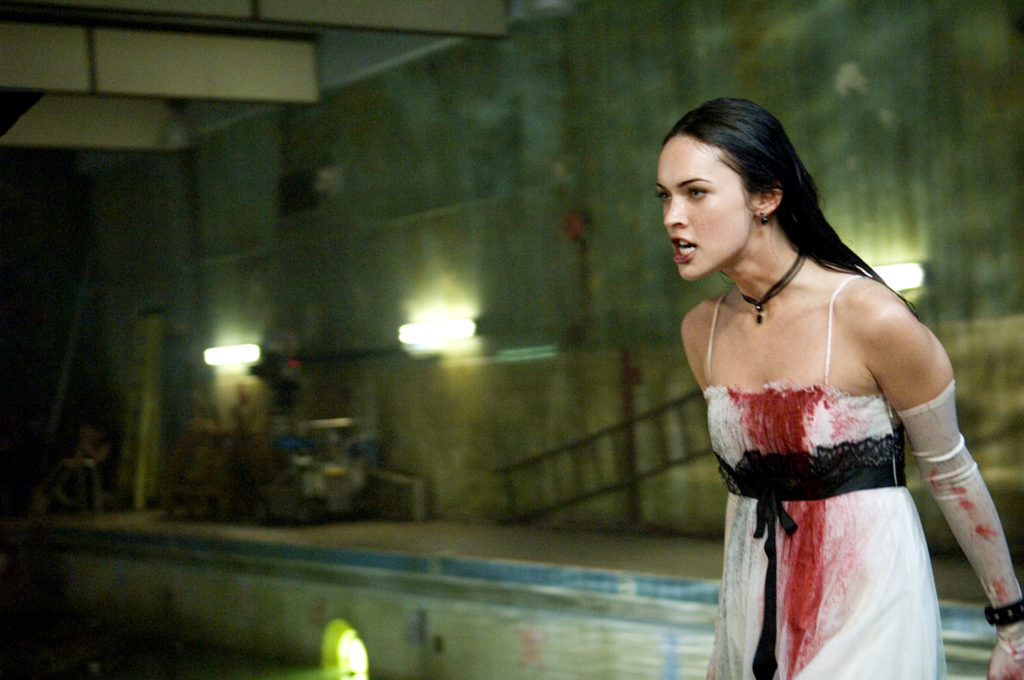 For an R rated movie, it’s thoroughly tame: as horror movies go, dare I suggest, it’s lime-green jello. [Or the Low Shoulder among indie rock bands, if you prefer. Their shitty songs may be the most horrific thing in this]. It barely deserves to be PG-13, save I guess for Jennifer’s potty-mouth. The gore is tame, and the sexual elements are all tease. Though I have to say, for a film that is not supposed to be “a cheap, trashy, exploitative vehicle for the hot girl from Transformers,” the scene of Fox slowly swimming through and climbing out of the water is pretty cheap, trashy and exploitative.

Ditto the lesbian canoodling between Jennifer and Needy. Filmed in lascivious third-person perspective, it’s basically the prototypical male gaze, rather than striking a blow for the LGBTQIAEBTHPPP [Sorry: cat on keyboard] community. Not that it goes anywhere, naturally. Nor does the film. Already on thin ice, it completely collapses in the final act. How does Needy know where to find Jennifer after her Goth snack? And we’re expected to believe a school library in this small rural town contains occult literature, explaining perfectly what happened to Jennifer?

Meanwhile, she lies to Needy’s boyfriend about her cheating on him – I repeat, a bitch who eats people, not a feminist icon – on our way to a ludicrous finale, where her super strength suddenly evaporates when necessary to the plot. If you are not rolling your eyes feverishly, by the time a crappy cover of Blondie’s In the Flesh [that’s subtle] plays, you’re not paying attention. Though I will admit my opinion from a decade ago does need updating in one way. The first sentence of it should now read, “I greatly preferred seeing this twenty years ago, when it was called Ginger Snaps“…