Just when I thought Charlie’s Angels was the gold standard for painfully woke and completely unnecessary remakes, along comes this re-imagining of Bob Clark’s proto-slasher. It couldn’t be more embarrassingly feminist, if it was sporting a pink pussy hat and believed that not shaving its legs was striking a powerful blow against the patriarchy.

Hawthorne College is preparing for the Christmas break, with students heading home. This includes the members of Mu Kappa Epsilon sorority, who have a frosty relationship with the Delta Kappa Omicron fraternity. That’s because the latter’s president,  Brian Huntley, raped MKE’s Riley Stone (Poots), and escaped justice. After carrying out a retaliatory bit of performance art, things get weird, as the MKE girls start getting creepy text messages. Worse, the sisters who left campus have apparently gone missing, a situation the authorities refuse to take seriously. What soon becomes apparent, is that their sorority house is no longer a safe space. 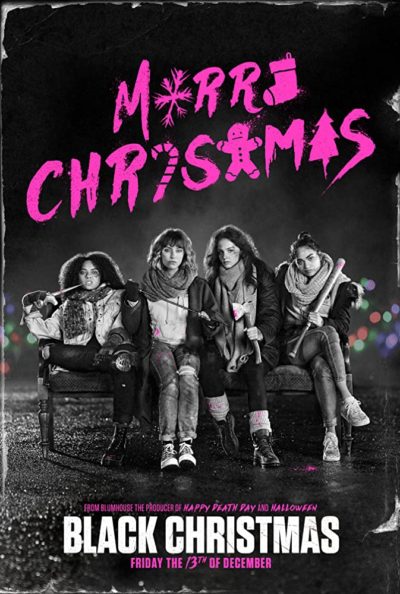 At its core, it remains a slasher pic, with college coeds being menaced during the festive season by a masked psycho. But Takal repeatedly forgets this, preferring instead to shoehorn into a simple narrative, clunky subplots about sexism, #MeToo and sisters doin’ it for themselves. Or to themselves, if an unnecessary opening conversation about a Secret Santa gift of a vibrator is any guide. It’s painfully banal and obvious stuff. Apparently, the solution to sexist representation in the horror genre (and that’d be a conversation for another day), is to make films featuring even shallower representations. Brilliant! And the answer to rape? Dress up like Santa’s little helpers and sing a lyrically-modified version of Up on the Housetop. “Dude! You won!”, squeaks one of Riley’s housemates to her the next morning. Uh, no: you didn’t.

There is nobody anyone outside a Hollywood echo-chamber could recognize as a “normal” person in this movie. The men, with one exception, are sexist Neanderthals. That exception couldn’t be more of an archetypal soy-boy if this had been the intention. On the women’s side? There’s Riley, almost entirely defined by her assault. Kris (Shannon), a fanatical activist who exemplifies the intolerant left. And the inevitable female fellow traveller with the sexists – because if you don’t buy wholeheartedly into liberalism, the only possible conclusion is that you are the enemy. I could perhaps handle all this, if it were any good as a horror film. It isn’t, being hamstrung by its PG-13 rating, as much as the makers’ desire to put its political agenda before storytelling.

In the final reel, it becomes positively risible. Firstly, a bizarre supernatural element is added: something about the cult being possessed by the spirit of the college’s founder. And then, the cherry on the top of this gluten-free, tofu flavoured slice of enlightenment cake, sees the completely untrained sorority sisters charging to the rescue, beating up the frat boys, after proclaiming, “You messed with the wrong sisters!” The only plausible way that might have happened, would have been for the women to be packing heat. For the dirty little secret is, those equalizers are a real feminist’s best friend against sexual violence. But that finale wouldn’t quite mesh with the agenda here, would it?