To mark their graduation, the senior class of Valley Hills High School get to party at the Wet Valley water-park. They are hardly a cohesive unit, however. Tensions are running high among the various cliques and factions. Matters are not helped by the water-park employees, who have issues of their own. The park has some dark history too, there having been”accidental” deaths there back in the eighties. With a slew of horny, drunk and high teenagers occupying the venue for the weekend, what could possibly go wrong? If you guessed, someone inserting a pair of giant blades into the tunnel of a slide, turning it into a giant Veg-O-Matic… Give yourself two points. 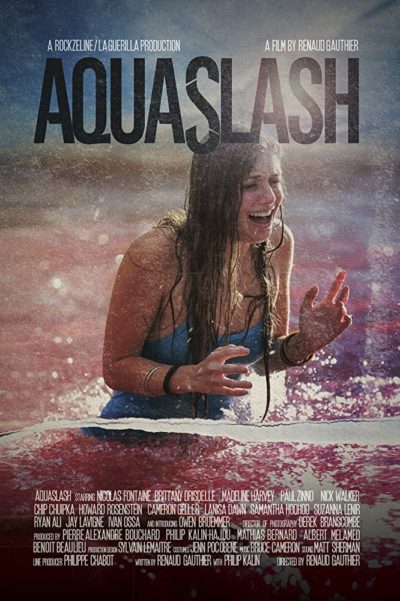 At only 71 minutes, this can’t be accused of overstaying its welcome. However, there’s only about 15 minutes of quality mayhem, all coming in one glorious if contrived chunk towards the end. People inexplicably continue to go down the pipe, even as the pool at the bottom turns into an industrial-sized vat of raspberry Kool-Aid, with a copious garnish of body parts. But we’ll take the sequence, simply for the grim and almost endless nature of it. However, it’s problematic, in that there’s no particular sense of justice being served or morality getting policed. The victims are non-entities, whose gruesome demises provide no particular sense of satisfaction for the viewer. It is truly torture porn, possessing no emotional impact at all. Still, if you were to fast-forward through the film to get to it, nobody could possibly blame you.

I can only presume it was a conscious decision by Gauthier, to populate his film entirely with unlikable characters. You’ll spend the first 45 minutes repeating some variation of, “Man, I can’t wait for them to die,” as a procession of repellent tropes unroll in front of you. Aggressive, jealous, arrogant, dishonest, smug, shallow: it’s a non-stop cavalcade of awfulness that, I will admit, becomes almost easy to hate-watch. It does a good job, at least, of giving you a slew of potential killers. Yet, as noted above, you don’t get the closure which would make the exercise worthwhile. Instead, the ending goes off in a weird flashback, about whose precise meaning I am still far from certain. While it may point us at a particular perpetrator, it falls short of providing adequate motivation for them.

In some ways it feels like this was originally two hours long, as there are a whole bunch of subplots which don’t go anywhere. Like the kid with a bleeding foot who finds a Sony Walkman buried in the sand. What was that about? Part of me also wants to think this is some kind of surreal spoof of the teen-slasher genre. But if that’s the case, then it would have been nice for it to have delivered an actual pay-off. Or maybe that’s the (non-) joke? Instead, the overall lack of invention probably suggests it just isn’t very good and, save for that singular sequence, it all feels severely watered-down. Hohoho.