Having poured scorn on the over-rated Jennifer’s Body, figured I should check in on Kusama’s other horror movie, see if she had improved since. tl;dr? Not really. This is, at least, aggravating in a different way. I guess that counts as progress. However, it is not much more plausible than the idea of a demon-possessed teenager eating her classmates. It begins with Will (Marshall-Green) and his girlfriend Kira (Corinealdi) going to a dinner party hosted by his ex-wife Eden (Blanchard). On the way, they hit a coyote with their car, forcing Will into some impromptu euthanasia with a tyre-iron. They should have taken heed of this unsubtle ill omen, and turned right around.

Instead, they carry on and arrive to find the other attendees more or less the Stepford yuppies. Mind you, so are Will and Kira: there is not a single person in this movie who feels like they exist in the real world. Speaking of reality, this house is in Los Angeles and gets no cell service – except when necessary to the plot. I’m sorry, is this suddenly 1987? Anyway, the idle, banal chit-chat eventually turns to the self-help group Eden and her new other half have joined. Before you can say “Heaven’s Gate,” everyone is gathered around a laptop, watching a creepy recruitment video. Any normal person would make their excuses and leave. It’s not as if Will has any specific reason to be there, beyond some shared trauma with Eden over a dead child. Yet he and Kira stick around. 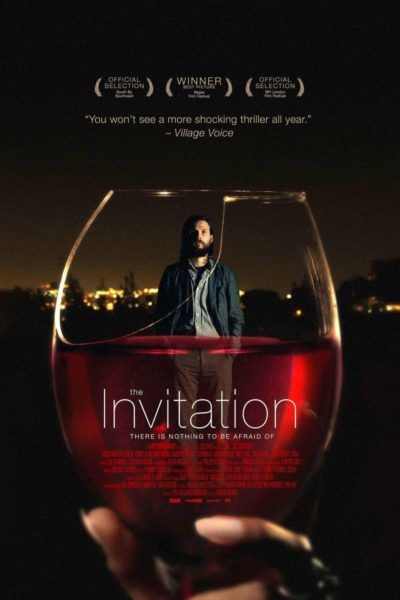 And around. And around. For this sets out its stall, that there is Something Very Wtong, in about ten minutes after arrival. It then takes an hour or so before Something Very Wrong indeed does happen. You’ll spend most of the intervening time yelling at our hero to get out, before giving up, and abandoning him to whatever fate his idiocy may deserve. Even after he snaps, shouting “Something very dangerous is going on here, and nobody’s talking about it!” – he still doesn’t leave. Yeah, we are now deep into “Dumb bitch deserves to die” territory. At least the cultists have a reason for behaving like aliens who have adopted unfamiliar human form.

After things eventually kick off, it’s no great shakes, and you should be easily able to see it coming. However, I was just grateful for something – anything! – to happen, and so embraced it like a drowning man clutching a life preserver. Without wishing to give away too much, you don’t care about anyone who dies. Mind you, you don’t care about anyone who lives either, so it’s a zero-sum game. This did manage to elevate itself from a D grade with its final shot, which implies there is more going on. It’s not just a bunch of annoying rich kids being brainwashed into self-destructive idiocy! Though if ever there was a case of too little, too late, this is it.

What a bunch of stupid cults.