It was only after the fact that I discovered this was released in the same box-set – indeed, on the same DVD – as Lokis: A Manuscript of Professor Wittembach. I think it’s safe to say I have learned my lesson, and will be avoiding Polish folk-horror for the foreseeable future. For this is another one which, for much of its running time, would give drying paint a run for its money. It starts well enough, with the initial, intriguing synopsis covered in about 15 minutes. “A cavalry officer returns home to find his wife dying. With her last breath she confesses that she has sold her soul, and will return as a she-wolf.”

Rumblings of her involvement in witchcraft are so strong, no priest will attend her interment. Said officer, Kacper Wosiński (Jasiński), ends up burying his wife himself (top) with a stake through her heart, at the behest of his brother. Kacper then moves in with army buddy Count Ludwik (Brejdygant) and his disgruntled, younger wife Julia (Bielska). The Count has to make a quick exit due to the presence of raiding Hussars in the area, leaving Kacper behind to house-sit and, more importantly, wife-sit. Yet it’s not long before Julia’s Hussar lover (Lukaszewicz) shows up. For Kacper is a bit distracted by the nearby howling presence of a giant she-wolf. Then someone points out – because Kacper somehow failed to notice this – that Julia is the spitting image of his late wife [both characters are played by the same actress]. 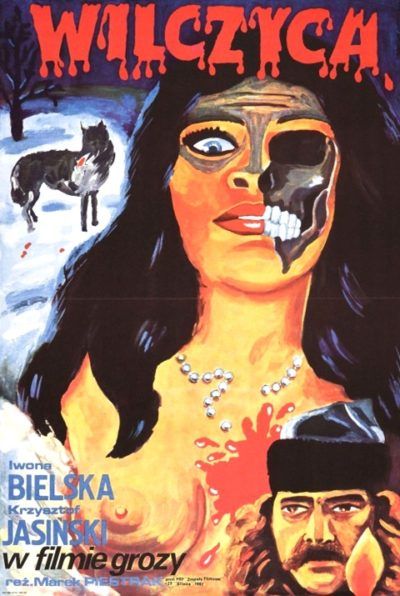 The actual lycanthrope elements in this aren’t too bad. The film both starts and ends strongly, the latter achieving a nice tone of inevitable tragedy. In almost real-time, we watch Kacper and a local doctor he enlisted to help him, make a silver bullet, quenched in holy water, and load the single-shot weapon. I dunno why he couldn’t just use an AR-15 like everybody else. There’s also a nice twist in the final shot, made no less satisfying by having spotted it a few minutes earlier. The production values are very good for a period pieces, and the photography of the wintry Polish landscape is fine, and occasionally excellent.

The problem is, more or less, everything between the start and the end. Here, the werewolf elements are packed away in a crate, marked “do not open for an hour.” Instead, we get a combination of domestic soap opera and 19th century War ‘n’ Peace, competing with each other to see which can be least interesting. They each have a good claim to be the champions of tedium, but I think I’ll go with the roaming Hussars, because they could be excised entirely without hurting the movie. Julia is, at least, necessary to the plot, though do not expect any actual transformations from her. You would never guess this came out two years after An American Werewolf in London. Mind you, it’d take more than Oscar-winning effects to salvage this.