This feels like an early ancestor of the now-popular “folk horror” subgenre, pre-dating even Blood on Satan’s Claw. Stylistically, you know what that means these days: a film which is long on atmosphere, and noticeably short on substantive content. It’s the biggest problem I have with this kind of movie. They are the nouvelle cuisine of cinema, serving up a beautifully arranged platter of asparagus flavoured sea-foam. Though Polish, this takes place in 19th-century Lithuania, where Pastor Wittembach (Fetting) is doing research. This takes him to the home of Count Michał Szemiot (Duriasz), who seems a strange member of the nobility from the get-go, first encountered peering into the Pastor’s window. His mother (Mrozowska) is barking mad, and being tended to by the family physician, Doctor Froeber (Lutkiewicz).

Turns out the trigger for the Countess’s behaviour was a bear attack, while pregnant with Michal. She and some of the locals now believe her son is part bear, and the truth is, the Count’s actions are becoming increasingly bizarre, ahead of his impending marriage. Not that Wittembach is bothered, being rather too consumed by his work. Otherwise, he’d probably have made his excuses and left. Mind you, when the marriage itself takes place, it’s basically a trip to the Red Flag Convention. Particularly notable: the organist at the ceremony is likely not going to get much of a gratuity. Save one death, that’s about it. The Pastor heads off on the train and there’s a sort of a resolution, maybe. Or maybe not. 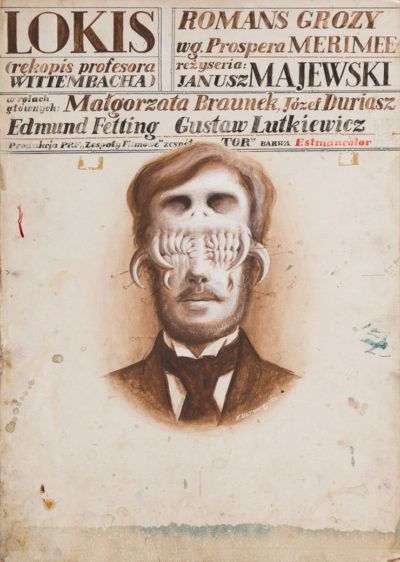 What is it with the Poles and bear rape? [I’ll confess, I did wonder whether or not the animal was also on cocaine] For this plays like a far more subdued and genteel take on the topic, compared to Walerian Borowczyk’s The Beast. This could almost, if you squint hard enough, play as a sequel. Actually, not particularly that hard, since both movies were inspired by Prosper Mérimée’s 1869 novella, Lokis – the Lithuanian word for bear, more or less. Though made only a few years apart, the gulf in approach is closer to that between the original Cat People and Paul Schrader’s remake. Regular readers should be well aware which of these I prefer.

Oh, this looks very nice, to be sure. There’s a wonderful shot in the opening credits, where only the world seen through Wittenbach’s glasses is in focus. I’m sure this is a metaphor. But it’s just too damn polite, tip-toeing around the edge of a topic, better served by going for the jugular. Bear rape, people! Serious business.The closest we get to acknowledging this are etchings of the attack on the Countess – an itiem which raises a whole series of questions in itself – that have her clothes being ripped off by the anti-social ursine. Instead, there’s a whole series of puzzle pieces, such as the old crone who lives in the woods, that the film aggravatingly refuses to assemble into an interesting narrative. Needs more bear.