I knew this was potentially a match purely from the synopsis, which I quote verbatim: “Two scientists genetically engineer a shark with legs, which escapes their captivity, and goes on a murdering spree wielding a chainsaw.” It would be quite difficult for any film to live up to that sentence. However, this manages to deliver exactly what you would expect and not only live down to my expectations, it went below and beneath them. Words cannot truly express how utterly inept, feeble and incompetent this movie is, in ways both big and small. Yet, at least for the first fifteen minutes, it has been a very long time since I have loved a movie, so damn hard.

There’s not much to add to that synopsis. The shark (Danielsson) escapes, and attacks a group of friends celebrating a birthday with a camping trip, leaving two sisters (both played by Storgärds) the only survivors. It picks up a chainsaw from a forester doing a spot of tree-felling, in the middle of the night, for some reason. Shark hunter Bror (Vedin) teams up with brunette sister to capture the shark, only for the scientists to let it escape again, after equipping it with cybernetic enhancements: “It was very irresponsible of us. When I think about it, it was actually pretty goddamn stupid.” Bror sets a trap for it, reasoning that “Serial killers just can’t resist young people in a cabin,” and brunette sister lies in wait with a big gun. A really big gun. 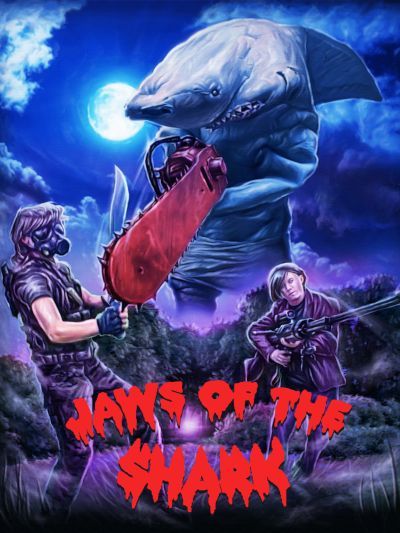 It all feels very much like a low-budget knock-off of  The VelociPastor, though came out six years earlier. It is also worse across the board, not least in the shark costume which is little more than bits of foam, stapled together into an approximately shark-shaped configuration. Though Swedish in origin, it’s all in English, even if some actors appear to have skipped that class at school. The acting seeks to make up for in enthusiasm what it lacks in talent, and the results are variable, to put it mildly. Storgärds’s dual role works pretty well, but Vedin is terrible – and in a bad way – the film grinding to a halt whenever he’s on screen.

This middle, Bror-heavy section stops it from being a true classic, since he significantly overstays his welcome, even though the whole thing runs barely an hour. That’s likely for the best overall, as it helps avoid the laws of diminishing returns. The gore is energetic, and as crap as every other element, while the lack of nudity is disappointing. The closest is a babe sporting a Norwegian flag bikini, which may be some kind of sarcastic social commentary on their Scandinavian neighbours. In that area, there’s also an identity parade where the murder suspects are Leatherface, Michael Myers, Ghostface, Jason… and a black guy. Yeah, nah. However, if you ever wanted to see someone decapitated by a shark driving a sports car through the air, consider that achievement unlocked.