I don’t know whether to be insulted or not that Amazon Prime threw this one up in their “Movies we think you’ll like” section. I mean they’re not wrong. We pretty much decided this had to be seen after reading the synopsis: “After losing his parents, a priest travels to China, where he inherits a mysterious ability that allows him to turn into a dinosaur. At first horrified by this new power, a prostitute convinces him to use it to fight crime. And ninjas.” The only thing which needed to be done thereafter, was checking to make sure we had sufficient alcohol to cover the course of proceedings. Because this was clearly That Kind of Movie. Fortunately, we did – albeit in the form of a range of miniatures, which for some reason were lurking in the drinks cabinet.

Now, I don’t have to drink to enjoy myself. But there are some things I do have to drink to enjoy: karaoke, for example. Sober, I’m far too inhibited, and listening to other people’s atonal honking is akin to torture. But give me a few beers, and I’ll be delivering Abba’s Waterloo in the style of Rammstein, and tolerating family members who think they’re Celine Fucking Dion. Because like all other drugs, alcohol doesn’t open your mind. It just lowers your standards. And there are times when that is exactly what you want, this being one of them. However, here’s a PSA: Three Olives Pineapple Vodka is the best argument for prohibition in a long time. I’m pretty sure no actual pineapples were harmed in the creation of this chemical weapon of a drink. 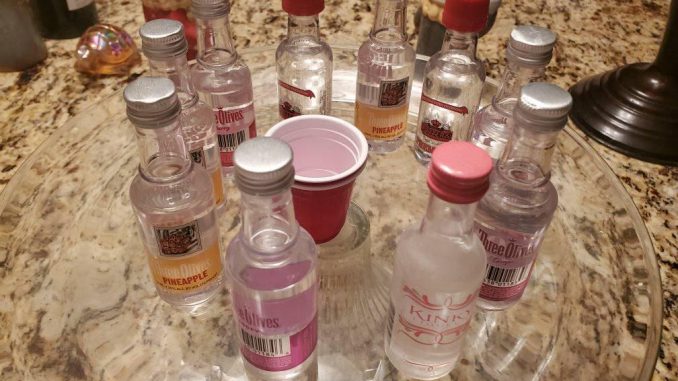 You won’t be surprised to hear that The Velocipastor is also That Kind of Movie which was spawned from a faux grindhouse trailer. It was initially created by Brendan Steere, back at the beginning of the decade. An attempt to crowdsource funding at that point failed: turns out even Kickstarter visitors have standards, and it reached only $1,612 of its seven grand goal. In the end, the film’s $35,000 budget was raised privately, through a friend of the director’s mother, and the film premiered about six years after its trailer was created. Since then, it has acquired a cult following and a distributor, which is how it turned up on Amazon’s recommendations list.

It does, of course, almost entirely suck on any objective level. This is clear from a start where the parents of hero Doug Jones (Cohan, who could be Michael C. Hall’s stunt-double, with the right lighting) are blown up with a car-bomb, a tragedy depicted entirely in captions such as “VFX: Car on fire.” Yet this also illustrates the way in which the film embraces its own suckiness. If the film has a moral, this appears to be, it’s better to make no effort at all, than to half-ass something. The whole movie is full of this: it either doesn’t bother at all or goes full-bore, with little middle ground. For instance, the former category would include its depiction of China,  consisting of an extremely large caption stating “CHINA”, as if credibility was in direct proportion to font size. Yet the moment where someone steps on a land-mine and literally instantaneously liquidizes, is spectacularly well-executed. 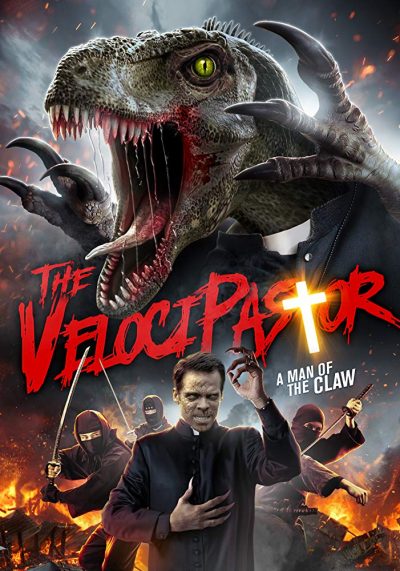 The synopsis cited above is largely accurate, though omits a couple of elements which deserve more coverage. There’s a mentor priest, Father Stewart (Steere, the director’s actual Dad), who is troubled by Jones’s vigilante campaign of dino-vengeance, and takes him to an exorcist, Altair, played by cult singer-songwriter Aurelio Voltaire, because… To hell with it, why not? And the ninjas – which, as Chris astutely pointed out, are nothing to do with China – are part of an entire sub-plot involving master of martial arts Wei Chan (Yang) and a long-lost – well, more entirely forgotten – relation of Doug’s. He also rescues the prostitute, Carol (Kempinski), from a pimp called Frankie Mermaid, because he’s swimming in bitches. Cue subsequent death by raptor in the confessional, after Mr. Mermaid admits to having been behind the car-bomb

I will admit, there are parts of this which do drag a bit. An example would be the Vietnam flashback. This is supposed to link Stewart and Altair, though I may have blinked and missed the connection. Similarly, if you’re going to have a lengthy sex scene in a wannabe grindhouse film, I’m expecting some actual skin, and the script’s failure to have the pastor say “Vaya con Dios” at any point is almost unforgivable. As a result, this doesn’t quite reach the delirious heights of Hobo With a Shotgun. If you are a busy person with a busy life, watching the trailer will deliver 75-80% of the amusement, in a fraction of the time.

However, doing so would mean you miss out on the delicious payoff at the end, where for the first time, you get to see the velocipastor to full effect. Even the picture at the top can’t do it justice, though should illustrate the gap between the poster, and the movie’s reality. Seeing this in motion, ripping arms off and swatting ninjas around with its tail, fully justifies the film’s existence. It’s another example of the “all or nothing” approach mentioned above, and fortunately, falls firmly into the “endearingly shite” column, being a man in a ridiculous suit. Somehow, if it had been competently executed, I would have been bitterly disappointed. As is, the letdown is limited to discovering in the end-credits that Cohan wasn’t actually inside the suit for the sequence. I bet you Tom Cruise wouldn’t have required a stand-in.

What you get out of this will partly depend on your familiarity with the B-movie on which Steere is riffing. Such as the opening caption, “Rated X… By an all-Christian jury,” which is a nod to the tagline for blaxploitation classic, Sweet Sweetback’s Baadasssss Song: “Rated X by an all-white jury.” And some obvious comic potential was left on the table, e.g. subtitling Wei Chan, rather than having him outrageously dubbed. However, there seemed more than enough to keep me amused – albeit with the help of that selection of miniatures.