This wasn’t Hammer’s first foray into converting other media to the big screen. The previous year, Guest had directed Life With the Lyons, a comedy spin-off from the radio series of the same name, and previous films from Hammer had included ones based on the popular Dick Barton and PC 49 franchises. This was, however, their first TV adaptation. It was a remake of Nigel Kneale’s 1953 series, The Quatermass Experiment, the first British SF show aimed at adults. A popular and critical success, it paved the way for the likes of Dr. Who. Hammer had contacted the BBC about getting the rights almost immediately the opening episode aired, and eventually negotiated their purchase for an advance of £500. 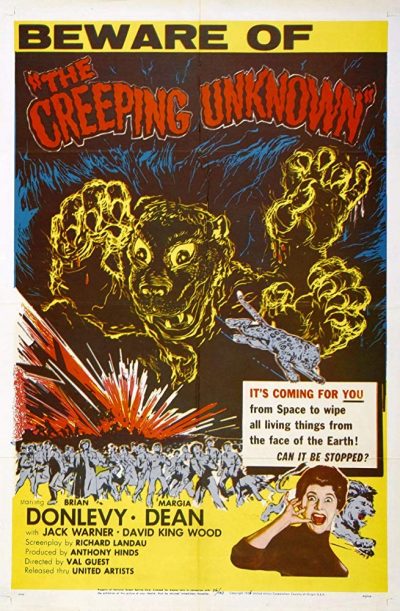 ight from the get-go, the studio were unashamedly going for the jugular. The adults-only “X” certificate had been introduced by the British Board of Film Censors in 1951, and the draft script Hammer submitted to the BBFC raised concerns, even for that category. The BBFC’s reply reminded Hammer that they would not pass “sequences in which physical agony and screams of pain or terror are unnecessarily exaggerated or prolonged.” Much of their subsequent marketing, such as the dropping of the E from “Experiment” in the title for its original release, played off this. Which made sense: promising things beyond what television could show was a smart way to get an audience already familiar with the story, to show up again at the cinema. And it worked. Released nationwide in the UK with French thriller Rififi, it became the most successful double-bill of the year.

Of course, time has entirely robbed this of any horror impact. The BBFC currently rates it PG, the same as Bedknobs and Boomsticks. It’s going to have to survive on other merits, and these are a bit flaky. Even inflation adjusted, its budget in 2020 money would be only $1.1 million, far short of what you need to depict convincingly a human turning into an alien and menacing Westminster Abbey. This is apparent from the start, the crash-landing of a rocket which kicks things off, being experienced from inside a farmhouse, preceded by enthusiastic off-screen pointing. The monster, when it appears at the end, is largely awful. Oh, I’m sorry: that’s a typo. I mean, “largely offal.” Because Les Bowie genuinely made it out of latex and cow entrails. This is the kind of “can do” attitude I feel is missing from the modern British film industry.

In between, the plot concerns sole returning astronaut Victor Carron (Wordworth, occasionally looking like a young Klaus Kinski). It’s a bit awkward, because Prof. Bernard Quatermass (Donlevy) is fairly sure there were three astronauts on the rocket when he sent it into space. Victor isn’t saying much, probably because he’s slowly turning into a hideous pile of tripe, capable of sucking the life out of anyone unfortunate enough to cross his path. And without even the good grace to look like space-vampire descendant Mathilda May, thirty years later. All Victor can offer is agony in his eyes and an increasingly bad complexion. As a result, the film sags the most in the middle, when he’s staggering around, triggering hysterical reactions from his wife (Dean) after she realizes he’s part-cacti. Not what she meant when she said her husband was a bit of a prick, hohoho. 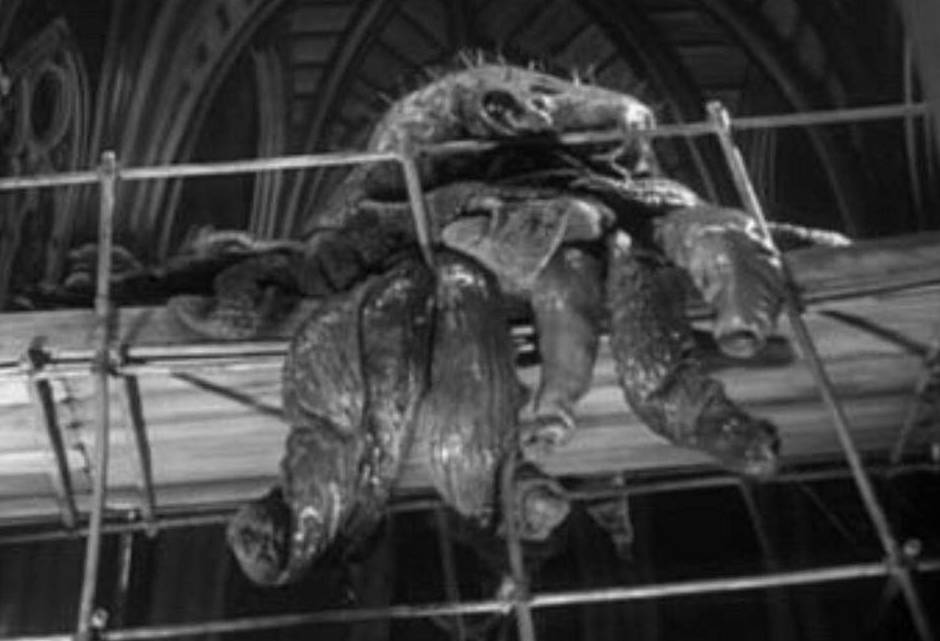 The entertainment value there is largely seeing people you know from other things. Warner plays Inspector Lomax, clearly getting his police training in during shooting. A month before this was released, he’d get a demotion to constable and begin his iconic role, running for more than two decades, in TV series Dixon of Dock Green. Gordon Jackson of The Professionals plays a TV director. Lionel Jeffries from Chitty Chitty Bang Bang is a civil servant, and Dame Thora Hird plays a witness who thinks what she saw was the “gin goblins.” Least recognizably, Jane Asher is a little girl who encounters the rampaging Victor as she plays with her doll, in a scene obviously inspired by Frankenstein.

I did enjoy Donlevy’s portrayal of Quatermass, who is less heroic than brusquely unlikable. He had been Oscar nominated in the forties for Beau Geste, but by this stage was, according to Kneale, “a former Hollywood heavy gone to seed.” And with a drinking problem to boot, though this doesn’t appear to have hampered production. He was brought in improve sales potential across the Atlantic, but his performance is a prototype for every irascible scientist thereafter, who doesn’t suffer fools gladly. This Quatermass, in contrast to the more caring incarnations to come, cares not one whit for the world and its petty issues. At the end, having saved the world from imminent monster sporing by routing all London’s electricity through it, he stalks off “to start again,” the film’s final shot being another rocket taking off. Pausing to consider your major role in causing the near-disaster just averted, is clearly for pussies.