I like to think of this as an unofficial remake of Legend of the Holy Drinker, with Hauer again playing a homeless man, whose modest and honest ambitions are perpetually derailed by the hand of fate. Ok, this may be a bit of a stretch. For it is everything Drinker wasn’t, in terms of tone and content: a raucous celebration of cinematic violence and grindhouse morality. That a well-known and critically-acclaimed actor like Hauer signed up for it, tells you a lot. That he is perfect in the title role, giving it equally much in terms of commitment and effort, as less grubby (and certainly better-paid) work, says even more. It’s a genuine shame Eisener – who also made the brilliant psychoflora short, Treevenge – has not apparently directed another feature since.

This is not just a movie which pays tribute to the style of the eighties “video nasties.” That kind of thing is easy to do: throw some faux artifacts onto your film, add in some anachronistic content like rotary phones, maybe a cheesily retro soundtrack and there you go. But what you have here is something which is also a thoroughly fun film on its own – and would have been so, regardless of the style. Hauer makes a great tragic hero; Downey, a fabulously slimy villain, chewing scenery up and spitting it out to great effect. Even Dunsworth takes a role which could have been simply a cliched “hooker with a heart of gold,” and gives it depth. There’s a lovely attention to little details here, which bring out the characters and make them seem larger than life: what could be more Canadian than a bad guy who shows up with ice-skates on? 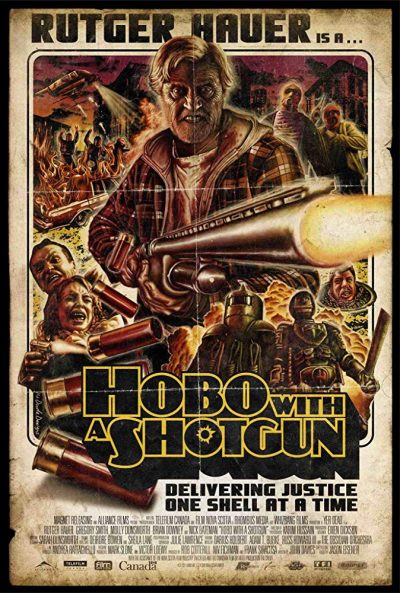 The same goes for the written elements, both the dialogue, or even the sign the hobo has while panhandling. Saying “Need $ for lawn mower” would be functional – adding “I am tired” at the start, imbues it with a beautiful poignancy, especially given Hauer’s recent passing. There are so many lines here which are quotable… albeit probably not in a work setting… or indeed, most places. But some day, I hope to find an appropriate setting to yell, “I’m gonna sleep in your bloody carcasses tonight!” This reaches its likely peak, in a speech given by the hobo in a hospital to a room of newborn infants. While “tears in rain” may be his most famous monologue, this is surely little less worthy of renown

A long time ago I was one of you. You’re all brand new and perfect. No mistakes, no regrets. People look at you and think of how wonderful your future will be. They want you to be something special… like a… a doctor or a lawyer. I hate to tell you this, but if you grow up here, you’re more likely to wind up selling your bodies on the streets, or shooting dope from dirty needles in a bus stop. And if you’re successful, you’ll make money selling junk to crackheads. And you won’t think twice about killing someone’s wife, because you won’t even know what was wrong in the first place. Or, maybe… you’ll end up like me… A hobo with a shotgun!

The level of awesome which this film frequently reaches cannot be over-stated. Of course, you can certainly look at this and see nothing more than a cheap, juvenile B-movie which thinks a shotgun duct-taped to point at someone’s dick is funny. But sue me: because it is funny, I’d say. While it may require a certain mindset to appreciate this, if you have that mindset, it’s damn near perfect cinema. 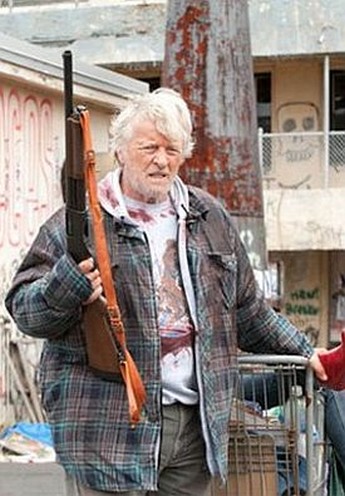 Original review [July 2011] A delightful throwback to the 80’s style hyperviolent exploitation flick see Hauer play the titular vagabond, who hops off a train in Hope Town, only to find it fails completely to live up its name. It has become a crime-ridden cesspool, overseen by The Drake (Downey) and his sons Ivan and Slick. After rescuing hooker Abby (Dunsworth) from Slick’s attentions, he is badly-beaten by the cops to who he delivers Slick, though Abby rescues him and tends to his wounds. When the Hobo stops a robbery at a pawn-store, it’s the turning point, and he becomes a vigilante, dishing out double-barrelled justice to The Drake’s men, and the others who have turned Hope Town into the festering sore that it has become. Needless to say, the crime boss is none too happy at the cowed residents having a figure other than him to whom they can turn. His sons fail to deal with the Hobo, so The Drake calls in The Plague, a pair of heavily-armoured killers, to deal with the threat, once and for all.

This is a gory, relentlessly offensive and enormously fun blast: in how many other films would the makers dare have the bad guys incinerate a bus full of schoolkids? But it centers on a typically-great performance from Hauer, who takes a character that could easily have been nothing more than a tattier version of Charles Bronson, and gives him and actual heart, even as the madness oscillates all around him. Credit also due to Downey, who delivers a startling turn that’s a complete 180 from his best known role, milquetoast Stanley Tweedle in Lexx. It has a consistent tone, something often forgotten by those who want to be “grindhouse”, slipping in little smirks to their intended audience, to prove they don’t mean it. Eisener is deadly serious, and the film is all the better for it. If the production values are occasionally flaky, the intent is clear from the moment the Hobo arrives on a rail, as the theme for Cannibal Holocaust plays. If you’re thinking, “That’s awesome!” – and you should be – I need say little more. B+