To describe this as “all over the place,” would be an understatement. It’s clear that Dvorak had a vision of what she wanted to accomplish, and I might even be able to figure out, in rough terms, what that was. However, in the process of converting it from an idea in her head, to coherent images on a screen, something seems to have been lost. And, by something, I mean everything. The heroine is Ilona Rudlov (Fried), an aspiring ballerina in New York who, like all aspiring “serious” dancers (see: Showgirls), is forced to make ends meet by shaking her ass in club Discoland Sylvie. [Confusingly, Discoland is actually located in Prague, which is one hell of a commute from Manhattan. It was rather notorious in its day, the owner serving 18 years in prison for ordering the murder of his wife.]

Ilona is even of noble blood, as her grandmother was a Czech countess who fled the country when the Communists took over, seizing her family’s castle, emigrating to the United States. At least, that’s the story she tells Ilona: as we’ll see, there’s a bit more to it than that. Granny died a few years ago, passing the deeds to Ilona, and she decides to return to claim her inheritance after seeing a news report about the overthrow of the Communists. It’s not clear whether this is supposed to be set in 1989, or if Ilona is simply not keeping up to date with current events, and didn’t notice the liberation of the old country for a decade or so. 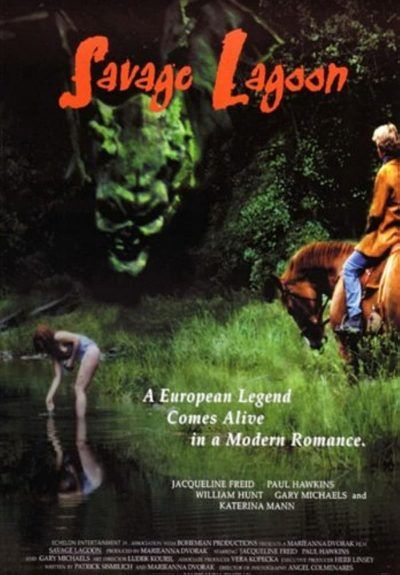 Either way, she’s on the first flight to Bohemia, and is soon reminded of the legend of the Savage Lagoon. It’s not really a lagoon, of course, which Wikipedia helpfully informs me is a “body of water separated from a larger body of water by a narrow landform, such as reefs, barrier islands, barrier peninsulas” etc. This is basically a pond. However, would you watch a film entitled Somewhat Creepy Pond? No, me neither. We are informed by a well-informed passing local that, “When the moonlight hits the surface and its fullness appears on the lake, the surface begins to open and the evil spirit charges with power.” This sets rather unrealistic expectations for what is to follow.

After finding the door to her ancestral home is inexplicably locked, Ilona wanders about for a bit, and encounters Jan (Hawkins), who lives nearby with his father and grandfather (Michael). Gramps has a Czech accent; Dad sounds American; and Jan appears to have spent his entire life in an English public school. No-one explains why, and Ilona never bothers to ask. She’s remarkably chill in general, even being more or less unfazed when she wakes up to find Grandpa sitting on her bed, staring at her, and he them demands she puts on some of his late wife’s clothes. Ilona complies without question.

She and Jan begin a relationship, despite a few character traits that I’d say counted as relationship red flags. These start with his tendency to hijack jam sessions at the local inn, in order that he can play a mournful clarinet tune. Dvorak’s a big fan though, letting us enjoy this performance in unedited format – one of several clarinet solos present in the movie. Though it has to be said, her taste in music is generally questionable, not least with the film’s entirely terrible theme song, Bohemian Moon. It includes clunkers of lyrics such as “Bohemian moon, you move so free/So high, so far, but still in reach for me/And you, you, you shine so bright/An eclipse of night, but I am still inside.”

Second, Jan is an enthusiastic hunter, something which goes entirely against Ilona’s pacifist tendencies. “How could you? Why would you hurt this beautiful, innocent creature?” she spits at him over the corpse of Bambi’s mother (below), before yelling “I hate you, Jan. You are a beast!” at him and riding off. Given parting on such terms, it’s perhaps a little hypocritical of her then to become even more pissed, when she overhears him banging local barmaid and token Eurototty Carla, with whom he has been in a relationship for eight years. Red flag #3: He kinda forgot to mention that to Ilona too. 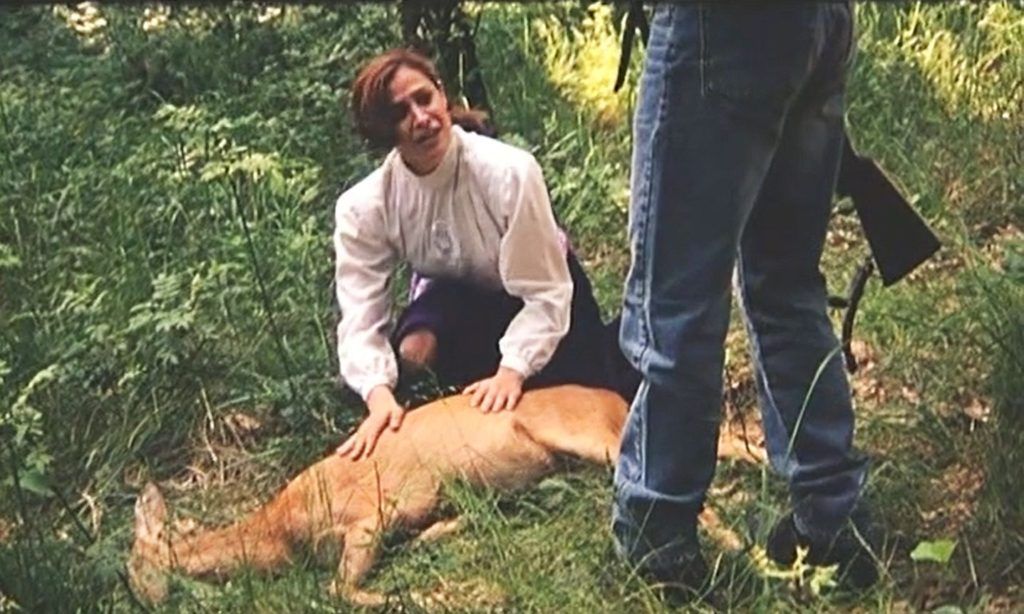 You might be asking “What about the savage lagoon?” and, to be honest, the film seems to have forgotten about this as well. The only exception is a passing couple who pause for a dip: she sinks beneath the surface while he… simply vanishes from the film, never to be seen again. Ilona, confused by her feelings, is abducted by a hermit who apparently lives in a cave under the lake: so he’s the monster? We’re then in Phantom of the Opera territory, as he refuses to let her leave, instead filling in the true backstory. This had her grandmother getting pregnant by an “indigent tramp,” and being cast out of the family by her brother as a result. He’s the hermit, having been hiding from the Commies ever since. Boy, does Ilona have news for him.

Elsewhere, we learn Jan is a grand-child of the same Countess, making them third cousins, which is a bit awkward given the sex they had earlier. He ventures into the lake and the caves beneath, seeking to rescue Ilona, only to be killed by his great-uncle. Then the monster rises from the lake and kills the hermit. So I guess he wasn’t the creature after all? I actually watched the ending twice, and it made no more sense the second time. But what matters is, Ilona returns to New York and gets the leading roll in a production of Swan Lake, and no longer has to shake her ass on Discoland Sylvie’s stage. So that’s nice.

The best thing you can say about this is, it’s never utterly dull, though there are a number of scenes which could certainly be excised, e.g. anything involving Jan and has clarinet. It is, however, woefully short on focus, with plot elements that come out of nowhere and/or evaporate without ever becoming relevant, such as Grandpa’s paintings. According to the IMDb, neither Fried nor Hawkins seem to have appeared in anything else, and based on their performances here, that’s for good reason. Nor has Dvorak directed anything else, though as of May last year, was still seeking funding for a feature called Mystery of Dawn. Despite the flaws here, I’d not mind seeing more from her. This should be considered the work of an auteur, albeit simply because no studio would ever make it.