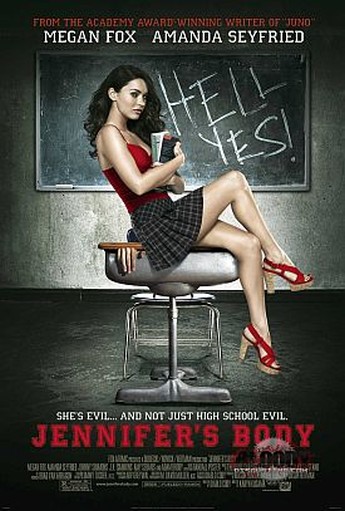 I greatly preferred seeing this ten years ago, when it was called Ginger Snaps. I guess I should have expected little better from the writer of the truly-abysmal Juno and the director of the severely-disappointing Aeon Flux, neither of whom have previously showed the slightest interest in the horror genre. Perhaps as a result, this pseudo-feminist nonsense falls about as flat as Seyfried’s chest. She plays “Needy” – oh, hold my aching sides – the plain Jane best-friend of Jennifer (Fox). After their trip to a gig in a local tavern goes disastrously wrong, Jennifer is driven off in the band’s van: when she returns, she is a changed person. Literally. To save you from sitting through this, she is now possessed by a demon, because it turns out the group were looking for a Satanic sacrifice, and Jennifer wasn’t the virgin they thought. Silly band. She now has the desire to feed on flesh, and after trying jock, decides to protect her relationship with Needy by chowing down on anyone else who shows the slightest interest in her. Which eventually leads her to Needy’s boyfriend, Chip (Simmons), who is nice, considerate and, above all, apparently tasty.

This tries to blend, horror, comedy and social (particularly, high-school) commentary, and fails in all three angles, almost completely. There are some occasionally funny lines – the Wikipedia jab did provoke a snort – but the horror side flops, because neither writer nor director know how to generate tension, and the social commentary has been done to death, and usually a great deal better. It might have been more interesting and/or subversive, to have Needy turn evil, and Jennifer try to stop the rampage. For what is basically an exploitation movie, unrepentently R-rated on gore and language, it’s remarkably coy about sex, with Fox never showing more than cleavage. There’s a lesbian makeout scene, but the film is all sizzle and no steak. There’s no morality on view to speak of, and proceedings lumber their way towards the predictable and uninteresting conclusion. I can imagine Cody chortling to herself as she wrote it, amused by her own wit. I sincerely doubt anyone else will be.