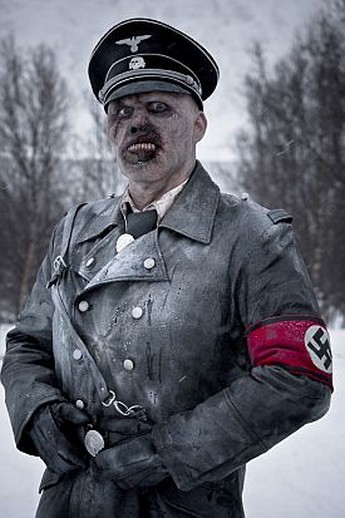 As they say, “If you watch only one Norwegian film about Nazi zombies this year…” Well, it’s almost certainly going to be this one, about a group of medical students, who head up into the mountains to a remote cabin. There, they find a stash of gold looted by the Nazis – unfortunately, its previous owners are now a) undead, and b) unhappy. To be honest, apart from the Nazi angle, which results in some spiffy imagery e.g. as shown on the right, there isn’t much new or original at work here. In the film’s defense, it does acknowledge this, with a brief discussion concerning how many horror films start off by having a group of friends going to a remote cabin. However, knowing it’s a cliche doesn’t make it any less of one. The same goes for the old local guy who shows up in the middle of nowhere to deliver the expositional monologue on why they shouldn’t be there, and while the victims are less irritating than many of their type, there isn’t need for seven of them, and they do blur together.

After a sluggish first-half, things improve dramatically when the Nazi zombies appear in their full glory. One of the characters is wearing a Braindead T-shirt, and there is some of the same gleeful inventiveness, such as the imaginative use of a snowmobile as a method of dispatch. There’s a couple of very well-constructed sequences, as the dwindling band of survivors, singly or in groups, deal with an apparently endless stream of undead Germans, under the control of General Herzog. A particular highlight is the bit where someone is hanging off a precipice, dangling from intestines, still attached on the other end to their owner. But I have to say, given these are soldiers up against medical students, they don’t seem all that keen to use guns – odd, since Herzog has no problem with binoculars. However, applying such logic in a film like this is probably a pointless exercise. Sit back and enjoy the carnage, and you will agree it’s certainly the finest example of the Norwegian Nazi zombie movie, perhaps ever made.