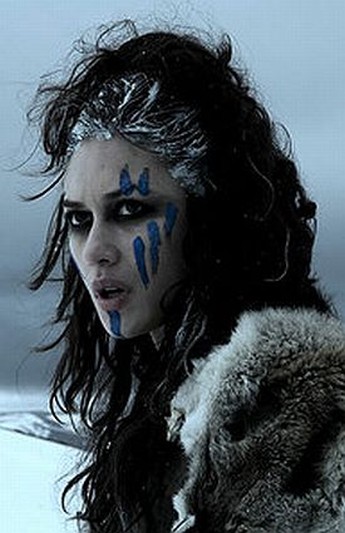 This occupies quite similar territory to King Arthur; both are set in the last days of the Roman Empire in Britain, and center on a mission to take on the barbaric inhabitants of “Scotland,” as I believe it’s now called. Here, the Ninth Legion heads North, only to be betrayed and their commander (West) captured by the Picts. The remnants, under centurion Quintus Dias (Fassbender), attempt a rescue mission, but that just results in the death of the Pict chief’s son. His vengeance, in the shape of mute tracker Etain (Kurylenko), is unleashed, and the surviving Roman soldiers have to make their way back South, from deep in enemy territory, harried by enemies both human and otherwise.

That’s definitely one of my shorter plot synopses, yet if I added anything more to it, I would be engaging in needless padding, for this is a straightforward, pretty simplistic story. That’s not a bad thing in itself, since this is an equally-straightforward action adventure flick, and as such is passable entertainment. The flaws are more in a structure which shows little or no sense of escalation. When we got to the end of the final battle, my reaction can be summed up as “Was that it?”, since it had little to distinguish it from any of the other battles throughout – instead of a rousing finale, the film peters out to a “meh!” ending.

It’s a shame, as there are certainly some good aspects: the cinematography is lovely, to the extend I was prepared to swear this wasn’t filmed anywhere near Scotland (though seems it was), the pace in the early stages is well-managed, and for someone who doesn’t say a word, Fassbender is suitably square-jawed and two-fisted, Etain is a great villainess. The battles are frenetic, messy and gory, to the point that it’s sometimes hard to tell what’s going on, though that doesn’t matter much. In the final analysis, however, it’s the least of Marshall’s four features to date, even if his batting average is still highly-acceptable.