Okay, maybe Khepri: Cockroach Tide wasn’t so bad, after all. That’s the overriding emotion after this, easily the worst of these Chinese creatures features I’ve seen to date. Part of my disdain is, admittedly, a result of the subtitles being in about 3-point font, spat out at a machine-gun rate, and almost inevitably, white text on a white background. It’s hard to look kindly on a film, when eyestrain and a lingering headache are the main things you take away from it. But I doubt that was a major factor in the overall, tedious and poorly-executed experience. It will, however, limit my ability to describe the plot or characters in much detail, though the broad strokes are clear enough. 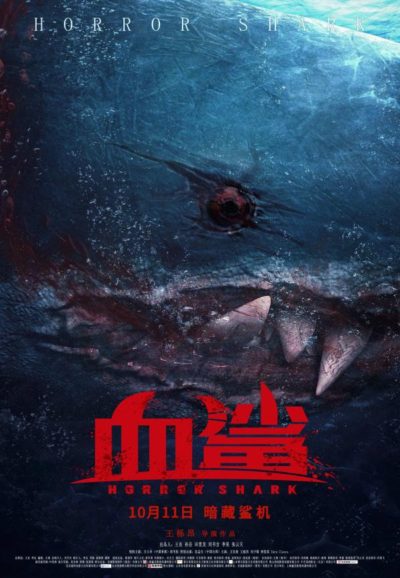 Basically, this is Deep Blue Sea, without Samuel L. Jackson. Hell, I’d have settled for LL Cool J, or a Chinese knock-off thereof. So we have a rich industrialist carrying out experiments on a number of captive sharks. As with Khepri: what could possibly go wrong? And, inevitably, it does. There’s one fish in particular which leads the charge, with a red-tinted head and tail, as if it was trying to start an underwater chapter of the Insane Shark Posse. On the human side, there is a guy who is suffering from Post-Traumatic Shark Disorder – so why is he here?. A lab guy with really wild hair. A random gwailo woman. Some will be eaten. Some will survive. You will be hard pushed to care about anyone on either side of the equation.

There was clearly a certain amount of money spent on this, with the laboratory sets reasonably spiffy. The problem is… uh, everything else. For example, the scenes supposedly set on the ocean, look more like they were filmed in someone’s swimming-pool, with no sense of depth at all. They have “small water-tank’ written all over them. That said, they’re far more effective than anything involving the sharks, which are some of the worst CGI I’ve seen outside of Birdemic. A lot of the time, it’s apparent that the “aquariums” in which the sharks live, are no more than video screens. I’m not sure where the supposed 3D comes in, though that might be a blessing, especially if it was of the same low standards as most of the other elements.

There are any number of moments, where we found ourselves rolling our eyes at the idiocy of this one – either the technical shortcomings, or the actions of the characters. I think we achieved peak roll when someone tried to take out the lead shark with a harpoon gun, then tripped, somehow managing to wrap the trail rope around her neck and almost strangle herself to death. If the shark really wanted to kill these people, I think it could just have waited, and they’d have taken care of themselves in fairly short order. Viewers may be contemplating something similar, in order to escape this poor quality mess.