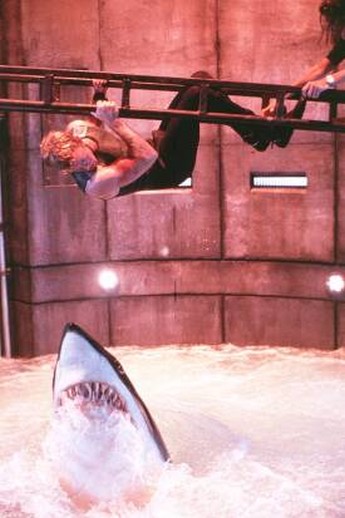 “They might take away our liberal procreation rights, they might give us bigger brains, they might suck our synaptic proteins from our heads, but they’ll never take…our freedom!” Or, what does an 8000 pound, 50 foot, huge-brained Mako shark, who leads a rather sheltered (caged) life, growing smarter by the day and hungrier for human flesh by the minute, want out of life? Renny Harlin gives us this summer’s action alternative to Wild Wild West, and has been compared stupidly to Jaws. There is no comparison: Jaws is Jaws, a classic film. Deep Blue Sea is an action-horror-adventure with a lot of action, lots of explosions and tons of severely cool shark attacks, though I’m hoping I’m not the only one that caught (no pun intended) the Jaws reference – think “cars”… Just remember I said it here first!

I can’t say the acting was top flight, but I never expect it to be in movies of this caliber simply because it’s obvious from the trailers that the real stars are the FX. And, since the only mainstream actor is Jackson, along with a great supporting role by L.L.Cool J, it stands to reason that there will be less than perfect dialogue: this way, you won’t get too close to the characters, and can enjoy it when they get chased and eaten. And by the Heathers of shark cliques too; I swear one scene was right out of Jawbreaker – the way the sharks strutted their stuff in the water, sleek, beautiful, cool, confident, not in a hurry, exactly like the bitches as they walked the school halls in packs. This movie is great fun and needs to be seen on the big screen to be fully appreciated. The sharks don’t exactly look real, but I suspect it was never the intention, since they were, in a sense, lab-created and improved versions of the world’s oldest killing machine. I’m just glad they didn’t talk or break out into song, cause that would’ve been a little much. But perhaps tartan and some braids?