Cockroaches are icky. There’s a certain visceral reaction to seeing just one of them skittering around, and so they’re a natural candidate for a horror movie. Most memorably, perhaps, the segment in Creepshow, where a germphobic millionaire gets drenched in them. This ups the quantity by a factor of a thousand, but the impact is not increased to match. Indeed, it is likely the most forgettable and SyFy-like of the film’s I’ve reviewed in this series. It takes place on a ship carrying the monumental invention of Dr. Victor Choi (Gerard), owner of PDR Biotech. Remote-controlled cybernetic cockroaches, intended to eat up the earth’s garbage, thereby solving the problem of pollution. You’re probably already muttering sarcastically, “What could possibly go wrong?” 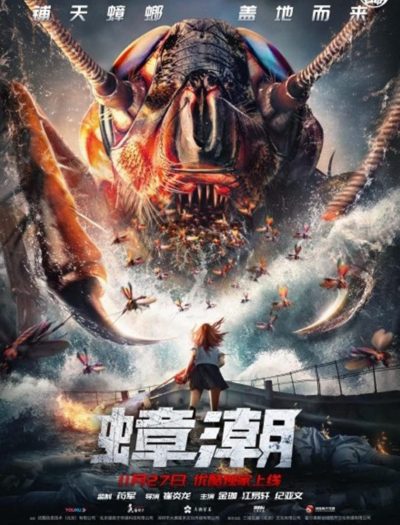 Of course, it does. The cockroaches, under the control of their queen (because that’s a thing here), have developed self-awareness. They unilaterally decide, rather than just tidying up, to address the source of the problem: which would be humanity. Beginning with the people on the ship. Representing the voice of reason is first mate Jianghe Qiao (Jin), though his attention is divided by the odd, never explained presence of his whiny teenage daughter Sihan (Jiang) on board. There are also the expected smorgasbord of scientists, sailors and a security detail who attempt to repel the roaches with bursts of automatic gunfire. This works every bit as well as you might guess it does, i.e. not at all, and numbers are whittled down steadily, as the survivors attempt to find a way to stop the insects from completing their new mission.

Beyond that ickiness, there’s not much on offer here, with the impact severely diminished by the sub-par digital work. This isn’t even limited to the roaches: the first shot of the “boat” sailing through the “water” – quotes used advisedly – is so bad, I initially thought it was some kind of in-movie screenshot. The only time it comes close to working, is when the quantity is big enough to counterbalance the quality, and you get literal waves of roaches, surging through the vessel. Otherwise, there’s an interesting idea when the captain becomes a cockroach controlled meat-puppet. This might have merited further exploration; the film lacks the imagination to bother.

The same goes for an undeveloped subplot about a secret agent plotting to steal the insects and weaponize then. She’s played by Zina Blahusova, who had a small role in Hostel. But it’s disposed of so quickly, you wonder why they included it to begin with. Instead, they go with the roaches assembling into a human form for a chat with their creator. If you are still sticking around for the end-credits, you get a bonus screen, hectoring you that “each and every citizen on the earth is responsible for the problems of waste.” The irony is, that the film telling you this, is mostly rubbish itself. If there was a way to recycle the 90 minutes spent watching this, I’d take it.