If you haven’t seen the anthology which was the original HorrorTales.666,  you’re not alone. That came out all the way back in 2003, so it… has been a while. But not having seen it is unlikely to affect your appreciation of this, though I was impressed they did get the same actor (Wynkoop) to play the burglar again. After 15 years in jail, he is back to breaking and entering houses, and once more is forced by paranormal activity, to read a series of horror stories. That’s the wraparound for the segments that follow. 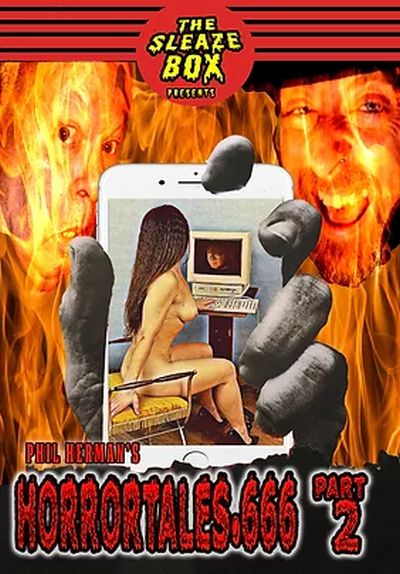 This struggles out of the gate, with sluggish pacing – a problem that comes close to sinking the movie before it can get going. It’s close to twenty minutes before we get into the first segment proper – which lasts half as long. Matters aren’t helped by atrocious audio in the very first conversation, where only one side is audible. An opening segment caption then refers to “An Amatuer relator’s plans”. Do they perhaps mean “An amateur realtor’s plans”? I’m happy to cut slack for a low budget, but this kind of sloppy attention to detail is harder to forgive.

Once it arrives, the segment, Open House, is about a work prank that goes wrong, because of long-buried trauma in the past of the victim (Burger). It’s a slight entry, but at least is horror. That’s more than can be said about The Last Farewell of Mr. Perez, which is basically horror-free, being a science fiction tale about a man discovering his alien heritage. Why is this even here? By the end, there was still almost an hour and a quarter left, and I was struggling severely to stay interested. I mean, our cat’s litter-box wasn’t going to clean itself, was it?

The final part, My Life, is staggeringly meta. In it, director Herman and producer Dustin Hubbard field calls from a slew of people who largely want to be in the movie you’ve just watched, and must be turned down. This is an obvious excuse for a bunch of cameos, and I think you’ll get most out of this if you’re already familiar with their previous work. I am not, though did still recognize the likes of Debbie Rochon (scene-stealing as ever!) or Shawn C. Phillips, and got a laugh out of Hubbard’s line, “I don’t want to be rude… but piss off!”

It’s always in the nature of anthologies to be variable. This takes that inconsistency to an extreme, with a couple of segments (including the wraparound) that are largely useless, three that reach varying degrees of somewhat okay, and one which hits the bullseye by gleefully and wholeheartedly embracing its own innate idiocy. You will need a high tolerance for microbudget cinema, to be sure. But at least the litter-box remained untouched.