This does not hang around. Typically, in a disaster movie or similar, you’re introduced to the victims and get to know them, before the carnage ensues. Here, however, the tsunami shows up after approximately 90 seconds (including credits). Character building? It’s vastly overrated. There is actually a significant plot-point to this sudden and unexpected tidal wave. The local alarm system was deactivated by evil property tycoon Cha Wo (Lau), who sees in the tsunami a chance to clear some pesky tenants, tht have been standing in the way of his development scheme. Just in case it doesn’t work, he has a backup plan: a gigantic crocodile called Gustav. [A nod to the infamous reptile from Burundi of the same name, reported to have killed as many as 300 people]. 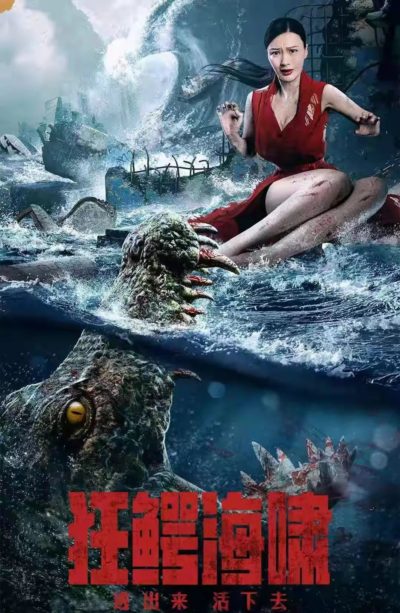 This was being delivered in a truck by Jiang Peng (Fei), when the wave hit, just as he was arguing with protestors, including his daughter,  Xiaohu (Wang). Swept into the city, everyone takes refuge initially in a supermarket, but this offers scant protection against an aggrieved, giant crocodile on a mission to munch. The steadily dwindling band of survivors, try to make their way to safety, after it turns out that Cha Wo has called off the search and rescue mission. Ziplines, helicopters and inflatables all fall prey to Gustav – the last of these felt somewhat copied from a similar sequence in Hollywood croc-pic, Crawl. Though Gustav gets bonus points for using the boat as a battering-ram, to bust into the supermarket.

I do have some issues with the depicted size of Gustav, who seems much larger out of the cage than in it. Cha Wo’s plan also seems rather more complicated than necessary; admittedly, he seems capable of summoning tidal waves on cue, like Moses. However, the pacing is generally brisk and efficient, and there even appear to be some practical effects used, instead of this being a CGIpalooza of monsters. There are some points where it is digitally problematic, such as where Gustav rampages through the subway. This is not convincing, in the slightest. But in general, most of the effects are competent enough, or at least are moving quickly enough not to draw unwanted attention.

It always feels like crocodiles are somewhat underutilized as movie monsters. Their big positive is, unlike sharks, they offer a two-pronged threat, both in and out of the water. Though the victims here never seem to try to hard to find a croc-resistant shelter in their large, urban environment. Somewhere down a narrow corridor would surely suffice: it’s not like Gustav could rotate 90 degrees and sidle along it. As the opening paragraph suggests, the characters are not much beyond afterthoughts, despite a couple of heroic sacrifice moments, where people bravely turn themselves into Human McNuggets, for the good of others. Somewhere, the CCP nods approvingly. Such subtleties are not why we’re here. It’s for the munching, and this delivers it in a satisfactory quantity and quality.