On the one hand, this is your bog-standard revenge thriller, in which city-born teenager Mike (Gosch), out deep in the woods of rural America, has to deliver payback to a group of four scummy beer-drinking and hell-raising types, after they kill his dog, grandfather and grandmother – in that order. He also ends up helping another random victim, Michelle (Dorsey), after she crosses the scum’s path, and becomes the subject of sexual assault. This is shot on video, and I point you to the date above, for some idea of what you can expect in terms of image quality. Actually, I point you to the screen capture above – and that has been lovingly buffed as much as possible. 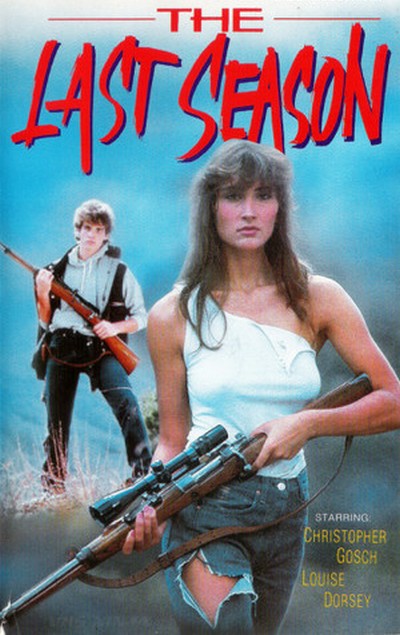 Throw in some questionable pacing decisions, and this could easily have ended up being almost entirely worthless. It’s most notable feature would have been pre-dating John Wick and its canine-instigated revenge plot, by over 25 years. But there is one interesting twist, reminiscent of another cult favourite (just not on this site…), Tucker and Dale vs Evil. Rather than the country dwellers being the villains, the scummy quartet are visiting city folk. And while Mike may be an urban kid, he appreciates and enjoys learning about the rural way of life from his grandfather. Their simplicity and respect for the natural environment stands in sharp contrast to Kruger (Cox) and his cronies, who are out in the countryside, purely to guzzle alcohol and kill things.

At least, that’s where the film initially seems to be going, an early encounter with Mike and his dog at a gas-station, setting the tone. Though there is an early suggestion that one of the “city yokels”, Sandy (Murphy) is rather out of place, lacking the required psychopathic nature. Kruger – the name possibly a nod to David Hess’s character in Last House on the Left – is clearly the smartest of the bunch. He’s trying to clean up the mess. Only, he inevitably ends up digging a deeper hole and causing bigger problems. Even when Sandy tries to broker a truce between the gang and Mike, Kruger has other plans, basically sealing everyone’s fate. Oh, well: at least he tried…

If the movie does put some effort into the characters, and largely gets them right, just about everything else is a more or less unmitigated disaster. Half the time, it’s a struggle to see what’s going on, and even when that isn’t a problem, there’s precious little tension generated. Nowhere might things be more mishandled than the ending. It feels like the film had reached a point at which the end credits should be rolling. Only, it grinds on for close to another 15 minutes, largely so we can get a chaste sex scene between Mike and Michelle. Then, there’s a tacked-on final sting that adds nothing of note. It sums up the generally incompetent approach, which left me appreciating why this one had been all but forgotten.