The above rating actually represents a major, major comeback for the movie. Because a quarter of an hour in, this was apparently locked in as the worst of the Chinese animal attack films I had seen to this point. Ropey special effects and immensely annoying characters, had us firmly cheering for Team Shark. But, hey! Whaddya know? The shark took our advice, and ate all the most annoying characters first, disposing of them inside 40 minutes. The sole survivor was then left on her own, and the film was all the better for it the rest of the way. 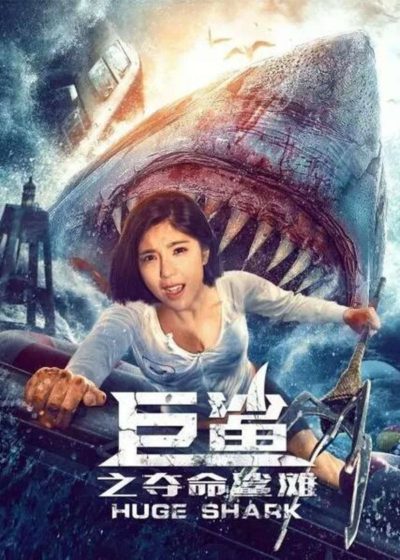 After an opening snack for the title creature, and a lengthy sequence of gratuitous surfing, things kick off with four “friends” taking a boat out for the day. I use quotes advisedly. For Zhou Tianming (Huang) is pulling a severely dick move. He has brought along his girlfriend Liu Yiran (Luan) – in order to dump her. Worse, he also invited her replacement, work colleague Wen Di (Hong). Completing the group is Yiran’s cousin and fourth wheel, Shen Xin (Zhao). She’s a doctor, and aquatically proficient. The break-up boat-trip goes about as well as anyone sensible could have predicted. All four end up in the water, and the idiot Tianming had forgotten to lower the boat’s ladder. While trying to figure out what to do, the shark shows up, forcing the survivors to head for a nearby boat, whose occupants were the introductory snack. Various efforts to improve the situation prove… ah, ineffective.

Which is how – and as noted, this happens so early, it’s not much of a spoiler – we end up with Dr. Shen, alone and aboard a buoy. Fortunately, it’s a somewhat well-stocked buoy, the supplies including water, a flare gun and a fuel can. Hmmm. How might those potentially be useful? But it’s a far from shark-proof location, especially considering the creature’s propensity for gymnastic leaps, as well as roaring, in a way more befitting Godzilla than Jaws. The second half of the film unfolds almost without dialogue, though does crib a bit too much from The Shallows. Still, the director does a good job, particularly with the night scenes. These are creepy without sinking everything into murky, near-darkness, and he gets the most out of the wobbly effects.

Credit, too, for pulling off the obligatory coda with some style, delivering a one-two punch that left me genuinely interested in seeing Huge Shark 2 [probably a.k.a. Huger Shark]. If you’re going to make a movie of variable quality, it’s probably better to start weakly and finish strong than the other way round, and this film is the poster child for that school of thought. If they’d simply dumped the good doctor on her own in the ocean from the beginning, and let the whole thing play without words, flashbacks or conversational seagulls (hello, again, The Shallows!), this could have been a genuinely ground-breaking bit of work, rather than only a small fraction of one.