There are a pair of legendary Chinese snake movies, released in 2018 and 2020, which I’ve not yet been able to track down with subs, The franchise goes by the name of – I shit you not – Monty Python. For a second on seeing this one’s title, I thought I’d found it. However, my… uh, “holy grail” appears instead to have been released in the West as Monster Python, though has remained as elusive as its title creature, save for this trailer. Confusing matters further, there’s no IMDb listing for Mutant Python, but The Mutant Python II does have one. From three years earlier, it’s apparently a sequel to a different film, which isn’t in the IMDb either. 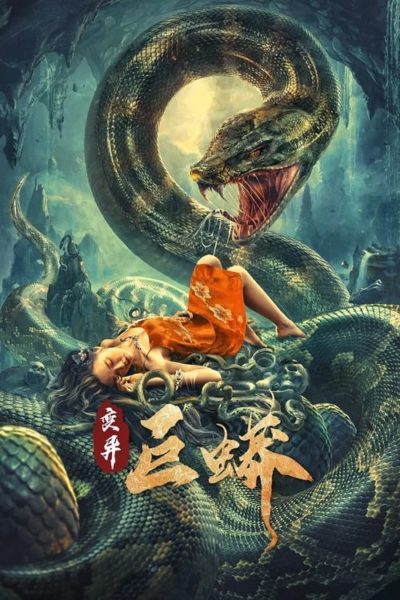 With regard to Mutant Python, I liked this one a lot. It’s rooted in local Chinese folklore, with the “long snake god” being worshipped by inhabitants of the remote Bei’ao village. There’s some justifcationfor this, as the underground mausoleums in which their ancestors are buried, have become home to a slithering mass of reptiles – mostly normal size, but there appears to be one significantly larger critter. Later, there’s a very quick mention of the rocks there being “hot”, suggesting perhaps radiation triggered a mutation, causing them to grow exponentially large. This apparent cinematic throwback to the fifties is kinda refreshing. The film also does a good job of keeping the snake largely hidden in the first half: there’s plenty of it later on, but by then, you’ve grown invested enough in the characters, it becomes easier to tolerate the low-medium tier of CGI.

Though it is difficult to take this film entirely seriously, when it centres on the Dong clan. Yes: Dong. Please forgive my schoolboy sniggering. After a giant snake eats a village elder, the residents decide the solution is to sacrifice a pure Dong woman (sounds like a contradiction in terms…) to the beast. To this end, they kidnap the young daughter, belonging to a family who bailed on the village after mistreatment, and now live in the nearby woods. This does not go down well with her brother, Dong Wenlin (Zi). He decides the best bet is to find and kill the giant snake, proving it’s not a deity. To this end, he brings in renowned snake-hunter Huang Zhenxiong (Jin) and his sidekick, also getting help rescuing his sister from Dong Wenjuan (Ye), who is not on board with the whole human sacrifice thing.

It’s the closest I’ve yet seen to a Chinese version of Tremors. Nowhere near as good, obviously, yet the way these disparate characters come together to fight the threat is quite endearing. With a slew of anti-snake gadgets, Huang is almost an Asian Burt Gummer. There’s also a nice bait and switch, where it seems they have managed to capture the snake, only for… Well, not so fast. Let’s leave it at that. It also uses the traditional ending of SyFy original movies, in which there’s an egg left behind: I’m not sure whether to add or subtract points for that. All told, it’s fun, and the novel setting certainly enhances its merits.