The Macguffin here is a rare plant called Lithospermum glabra, containing “super effective DNA repair enzymes” – which, I guess, means it can stop aging. The Jianghai Pharmaceutical Group wants it for their research, but it can only be found deep in the jungle, and previous retrieval operations have failed. Their chief scientist, Lin Cheng (Bo), is sent on one more expedition, this time accompanied by ruthless ex-special forces operative, now “security expert” Yang Fan (Wang) and his crew. Their casual, non-sustainable approach, in contrast to Lin’s respect for the environment, soon brings trouble. For as well as giant bats, the area is guarded by an industrial-size snake and its companion, a jungle girl (Chang). 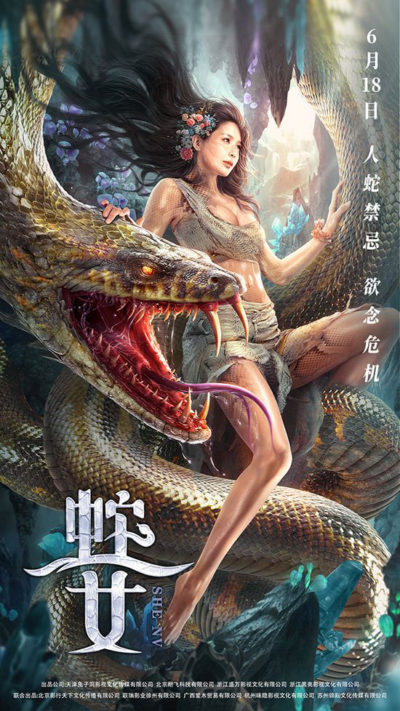 The first encounter results in a bit of a no-score draw. Yang’s team are decimated, but they do get samples of the plant, and Lin also brings the girl back to civilization. This is much to the disdain of predatory colleague and owner’s daughter Jiang Jie (Zhang – whom, scarily, I recognized from Escape of Shark. I have clearly seen too many of these…). Cue the “civilizing the savage” montage, and he names her Yi Yi. This does not, however, defuse the psychic link between Yi Yi and her guardian. So it’s not long before the beast comes swimming upstream to the city, in search of its human partner. Though I have to say, taking Yi Yi to a restaurant specializing in snake meat, feels a bit of a dick move on Lin’s part.

The city seems pretty chill about a giant reptile roaming the streets, perhaps because it only eats bad guys, rather than rampaging through the streets. At least until Jie abducts Yi Yi, using her to lure in the snake. After a brief spot of rampaging, it’s captured, and the dissection in the name of science begins. Due to the psychic link, Yi Yi begins to fade, but Lin revives her, thereby also reinvigorating the snake, by… electric shocks from a car battery. It’s an act of such idiocy, the film is compelled to issue a disclaimer: “This is solely for the effect of the movie. Please do not imitate.” At that point, the makers seem to throw up their hands, and say, “Sod this,” because the final 15 minutes are a slew of incomprehensible plot twists.

For instance, it looks like Yang is going to take a shot at revenge on the snake, for killing his men. But a few seconds later, Lin, Yi Yi and the snake are in the company’s nature preserve. A couple more and they are back in their jungle Shangri-La. Where the head of Jianghai Pharmaceuticals suddenly shows up to confront them. There’s a bit of heroic sacrifice. Oh, and a random scene with ninjas. Absolutely none of it makes any sense. I will say, the movie looks great. Even if the snake CGI is ropey, the photography is top notch, with some excellent locations. But the best thing here is definitely the poster (above right), which is a work of art. The film could hardly hope to live up to that, and indeed, it does not.