This is probably one of those cases where being foreign helps. If this was in English, it would be little more than a second-rate knockoff of The Evil Dead. But call it instead, “Un contrefaçon de deuxième ordre de La Mort Diabolique,” and it suddenly sounds at least semi-interesting: subtitles elevate everything at least somewhat, giving any movie a sheen of artistic pretension. While deficient on a number of levels, as contrefaçons go, I’ve seen worse. Much worse. Not that this makes it good by any objective standard, naturally; yet my attention didn’t make an excuse and leave the room. 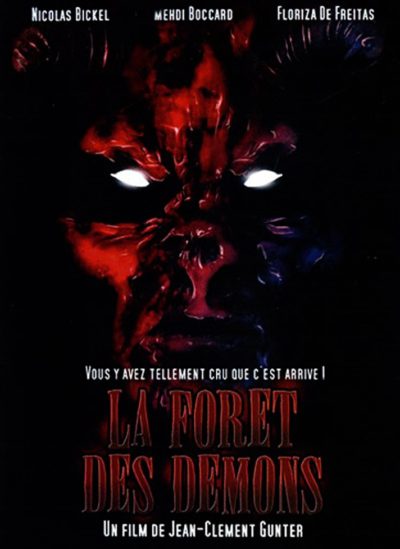 The story has a family of three who end up sharing a remote cabin in a forest (apparently, an extremely large one) with a group of college kids after a double-booking. The family’s son, Albert (Boccard) goes exploring, coming across a convenient plaque which tells how the area was home to a cult of devil-worshippers: the audience knows this, due to a prologue showing the camo-clad Satanists performing a ritual. Shortly thereafter, he’s chased through the forest by one – though it’s more of a moderate jog. He escapes by climbing a tree, leaving the demon at the base, jumping up like a guard-dog, until it eventually gets bored and drifts away. Mum and Dad don’t believe him, and he’s mocked by the college kids too, until the demons attack the cabin.

Though by “attack” I mean, push their way carefully through an unlocked window, the makers having clearly told the cabin owners they’d be responsible for any damages. Indeed, by “demons”, I may be taking the last letter in vain, since I’m fairly sure we never see more than one of them on screen at any point. They are, in fact, a bit crappy, little more than a mask. Besides the short attention span noted above, the one in the cabin is easily overpowered and tied up, then eventually dispatched with a common or garden blade to the back of the head. Though the one which attacks a courting couple having a picnic is a bit more effective. Not least for the extended sequence of it fondling the woman’s bosom after ripping out her organs (top), complete with sexytime music. Hey, demons have to cop a feel where they can, I guess.

Things progress thereafter in roughly the way you’d expect, with few surprises, yet some occasionally effective moments of gore. Clearly made just before HD video became easily available, the early scenes look especially rough, yet once your modern eye adjusts, it’s not too much of a problem. There’s a hint that space and time are distorted within the boundaries of the forest, which would have been nice to see expanded on. I’d have liked to see the local madwoman, who warns people on their way into the forest, perhaps holding up a sign saying “Je te l’avais bien dit”, as they fled. However, such wit or even thought is clearly beyond the low-budget aspirations here.