This one was a groundbreaking entry, showing that online distribution alone could still turn a good profit, blazing a trail which was happily followed by the other, subsequent ones we are covering here. It was also apparently popular enough to merit a sequel, the imaginatively titled Snakes 2. Though there is some doubt as to the name here: the subs firmly reject the plural, going with Snake. But that isn’t factually correct in the movie context, so I’m going with the IMDb-approved title. It begins in the war, when a Japanese battalion encounter the large reptile of the title. But the bulk concerns failed schoolteacher and single parent Lin (Huang), whose fringe research comes to the attention of Qi Teng (Yang), president of the Wang Hong group. He’s interested in getting hold of a rare fruit with medicinal properties, and convinces Lin to go along on the expedition to retrieve it, by providing medical care to his sick daughter. 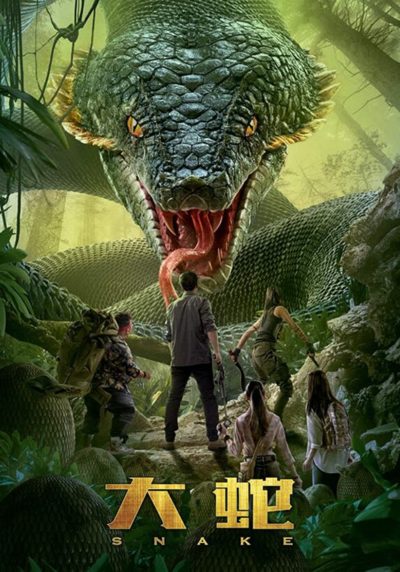 I think a clue as to the problems here can be found in the name of the plant: blood-sucking begonia. Yeah. Their destination appears to be Australia, based on the fact that everything here is trying to kill them, not just the F-sized snake. There are exploding fruits (hmmm… might those possibly come into play later?), and killer vines attached to something like a pissed-off version of Audrey from Little Shop of Horrors. However, the highlight is an attack on the expedition boat by a massive swarm of flying butterfish – though these critters act considerably more like piranha. One, in particular, manages to get trapped inside a cabin, and gives a very fair account of itself, before eventually getting pinned to the door by a large knife. I would not mind them being given their own fishy franchise. As in The Bloodthirsty Bees, the defensive approach of firing wildly at the attackers does not go well. The “hiding in a box screwed to the ship’s deck” technique is considerably more effective.

However, we are here, at least theoretically, for the giant snake, and it is… alright, I suppose. It does the usual kinds of things you expect from a giant, killer reptile. Slithering. Sneaking up behind people. Striking out of the shadows. And probably other things,  beginning with the letter S. However, even allowing for its relatively early place in the history of Chinese attack animals, it feels pretty rote. If you’ve seen many Western entries, all of what you get here will be pretty familiar. Competently enough executed, to be fair. Just not as imaginative as the stuff around the fringes, which ends up being more fun. The target of the expedition turns out to be a bit underwhelming, looking like nothing much more than a large raspberry. Finally, I could certainly have done without the botched attempts at humour, mostly stemming from the obese geologist on the team. It’s funny, ‘cos he’s fat, right?

There is something of a twist at the end, in that the heroic sacrifice comes from an unexpected source. But all told, it is a bit safe to make the top tier of the genre. Never mind Snakes 2, bring on Attack of the Flying Butterfish/Piranha Crossbreeds instead.