It only took took five minutes into this before I proclaimed, “I have clearly made a terrible mistake.” My cats, the only ones present, ignored me. It may have been the asshole reality TV producer Michael Bray (DeCun) in a MAGA hat. It may have been dumb Russian model, side-splittingly named Maria Putin (Hera). It may have been satire so blunt, it makes Don’t Look Up seem like a masterpiece of understated subtlety. For in this universe, World War III broke out following a spat between Trump and Putin over who had the biggest penis. I’ll wait for your hysterical laughter to cease. 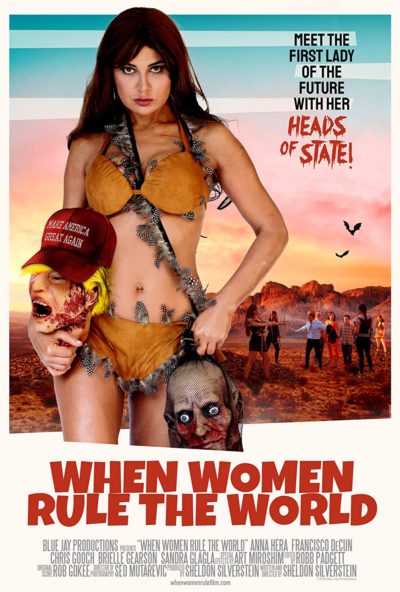 It was likely d) all of the above, combined with the poverty row production values. Michael and Maria, along with pals Jon (Gooch) and Susan get sucked through a portal, 100 years into the future, and a post-apocalyptic world where tribes of women have separated from men, and live in the desert,  under their queen, Auriana (Gearson). Hilarity fails to ensue. So does drama, As for the intended social commentary, if this is meant to showcase the positives of female empowerment, it’s not very effective either. For a century after the apocalypse, this gynocentric society is basically living in caves. The plethora of bikini-clad women might just undercut any feminist message a tad too. About the only semi-interesting notion, is that it’s Maria wants to go back to our current time, while it’s Michael who revels in the new, lawless world.

To the movie’s (slight) credit, it does improve, at least somewhat, whenever Michael is not on the screen. That’s increasingly the case as things progress, with the nerdy Jon trying to find out a way to re-open the portal, and return to 2020 with Maria. This might have been serviceable, if it had been the story from the start, without all the feeble attempts at satire, which come off below the level achieved by Queen of Outer Space. There’s something about an eclipse, and crystals, and a robot. If it probably doesn’t stand up to any scrutiny, Gooch is at least moderately likeable, and when Hera stops pretending to be dumb, she is no worse than the foreign starlets Hammer used in their cave movies.

The major benefit they offer though, is saving the viewer from having to engage with Silverstein’s politics, which indicate someone who spends way too much time wallowing in social media echo-chambers. Though I suspect even the cesspool of /r/PoliticalHumor would look askance at the toothless attempts to meme, put forward by the writer/director here. Look, there’s absolutely nothing wrong with making a cheapskate movie, featuring attractive, scantily-clad women pretending to be post-apocalyptic warrioresses. But, please, for the love of god, have the courage to own that shit. Don’t dress it up with po-faced proclamations, saying it is “a high-concept, sci-fi satire with sociopolitical themes that align with movements like #MeToo and Time’s Up and contain storylines that comment on toxic masculinity.” Because that way leads to me apologizing to my cats.