Often described as an Indonesian version of Phantasm, that is a bit of a stretch. No killer spheres. No Tall Man. A couple of moments might ring familiar, and that’s about it. It’s certainly no Roh, as eighties Asian knock-offs of Western horror classics go, and is much more its own creature. That’s about where the good news ends, however. For this proves that Christianity has no monopoly on shitty, faith-based movies. It begins with a funeral: the mother of Rita (Widowati) and Tommy (Rozy), and wife to Munarto (Mochtar). Tommy goes into a bit of a funk, and starts dabbling in the dark arts. We know this because he possesses a copy of Hammer’s Halls of Horror magazine (#21, should you care). Baby sacrifice is clearly next. 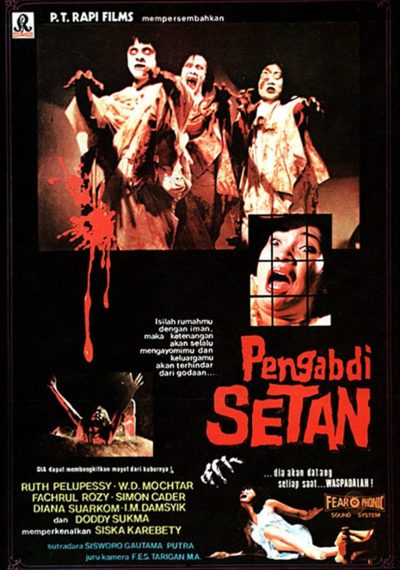 Things really start to ramp up, however, with the arrival of the anti-Mary Poppins, new housekeeper Darmina (Pelupessi). She couldn’t be more suspicious if she tried, and it’s not long before the corpses start piling up. First, the family’s handyman hangs himself. Then, Rita’s boyfriend dies, in the least convincing motorcycle accident in cinema history. That’s just the appetizer. For Darmina’s end-game is resurrecting the corpses, including Mom, to punish the family for their lack of religious faith. Apparently, by chasing them V-E-R-Y S-L-O-W-L-Y through the house. No, really: never mind running away, you could escape these Plague of the Zombies refugees with both ankles broken, and while stopping to smell the flowers.

There is precious little here that’s scary, and the effects leave a lot to be desired. They don’t stand up well in comparison, even to low-budget efforts in the West from around the same time. While I guess it’s somewhat laudable to have a film based on Muslim theology, that impact is severely weakened by slapdash scripting. This applies particularly at the end, where a mob with torches suddenly appears, and the final shot has the family leaving a mosque, clearly having abandoned their secular beliefs. Don’t get me started on the scene where they call in a local exorcist, only for him to be attacked and killed by… a possessed chandelier. I laughed like a fucking drain at that.

There is a distinct air of Western cultural corruption: Tommy has a poster of (shock!) Linda Ronstadt on her wall. Meanwhile, despite her boyfriend, Rita may be a lesbian, judging by the near-nude pin-up on hers, something raunchy enough I’d have been embarrassed to hang it in my teenage years (I wouldn’t even put up my Kate Bush poster, with its cleavage). It’s never made clear whether this decadence is the cause of their slide away from true faith, or a symptom of it. This is all a very blunt-force trauma approach to the topic, with all the subtlety of a Public Information Film of the era. “Remember kids: just say ‘No’ to disco.” It’s hard to see how it could ever have worked. But, hey, it was the eighties. And Indonesia.