In another world, there’s probably an Asylum knock-off of this, entitled Moderately-sized Squid. But in this dimension, we just have to be content with what we can get. It manages to combine maternal revenge with Nazi scientists, but does rather squander its title creature, which bears more than a slight resemblance to something out of the imagination of H.P. Lovecraft. Fisherman Shao Feng (Liu) accidentally catches a baby octopus of remarkable intelligence and cuteness. He wants to give it to his girlfriend, marine biologist Zi Mo (Zhao), but muscling in on the action is the evil Lin (Zhang), who works for a company called – and I kid you not – Greed Biotechnology. If that isn’t a red flag at to their intentions, I don’t know what to tell you. It’s like Facebook rebranded itself, “Gather your personal data and sell it to anyone, Inc.” 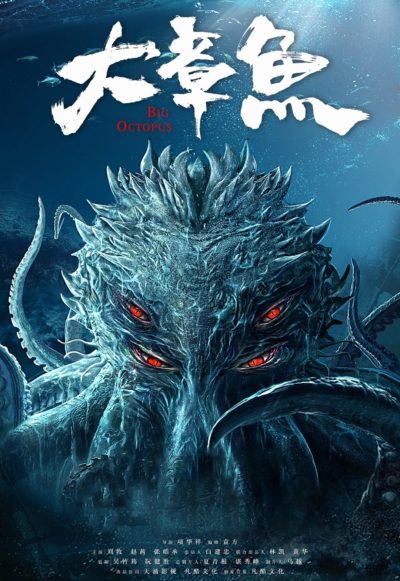 Meanwhile, Mommy Octopus, bigger than the kid by about a factor of 100 in each direction, comes to pay a visit. To cover the resulting damages, Feng has to accept Lin’s offer for Baby Ock (do-de-doo, de-doo). But turns out Lin is betrayed by Western mercenary Gael (Gan), who has his own agenda. He wants the extract which caused Mommy to grow so large, a secret which dates back almost eighty years, to a secret Nazi project from World War II. Everyone ends up in the island cave facility which was the base for the research, trying to get the serum responsible, while dodging the extraordinarily long tentacles of Mommy. They’re capable of reaching through the entire complex and she now seems to be bearing a personal grudge, having previously been reunited with her offspring. That whole thread is wrapped up by about half-way, though inevitably Baby makes a re-appearance at the end, in a rather touching scene.

The funny thing is, according to the IMDb poster for this, it stars Nicolas Cage. I am fairly sure that is not the case, though I would not have minded if he had shown up: maybe he dubbed Gael? Or perhaps Cage did motion capture for the octopus? I did like that creation, and wished we had seen more of it. For the great majority, we are instead limited to its tentacles, which were presumably considerably more easy (read: cheaper) to computer animate. The plot is also riddled with holes, even by the low standards of this genre, such as the way everyone conveniently ends up shipwrecked on the exact island used by the Nazis, after swimming at apparent jet-ski velocity away from the boat on which Mom is vigourously tentacling. There’s also the way the facility is in pristine condition after all this time. Or why Gael even bothers to keep Feng alive, since he serves no purpose in his overall evil scheme.

All told, I was slightly disappointed. Failure to live up to the advertising material, similarly goes with the territory. But the gap between the glorious poster and underwhelming “reality” was particularly palpable in this occasion.