Yeah, the alternate title makes rather more sense, but the main one is plastered all over the marketing materials, so I am going to embrace the loopy Chinglishness in all its glory. The shark movie is, regular readers will be aware, a particular favourite of ours. Of course, the Patient Zero of aquatic killer films is Jaws, which begat Orca and, as 23andMe ancestry tests prove, Sharknado, As noted in the lead article, the Chinese had been making animal attack movies for a while, but I suspect the specific creature here traces its ancestry to the popular success in the country of The Meg. The Chinese film industry is nothing if not responsive to such trends. 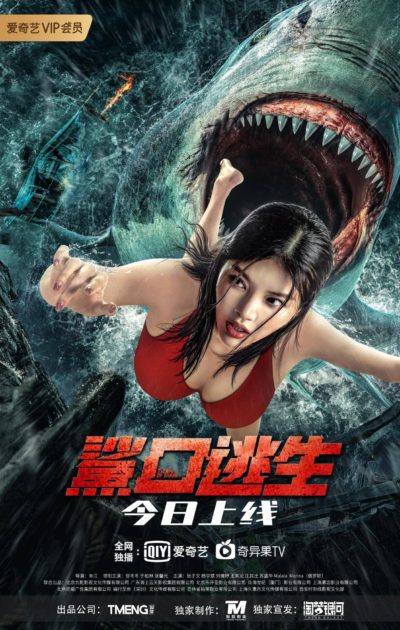 Though rather than The Meg, the structure is closer to Bait 3D. A tsunami sweeps in, trapping a motley bunch in the passageways and rooms of a Thai resort complex. Cut of (naturally) from help, the survivors are further menaced by a hungry shark, attracted to the scene. They cautiously make their way through the corridors, towards exit, while also dodging electricity and, as is required in this genre, bickering ceaselessly. The main character is Wang Lei (Yu), a free diving champion who quit the water after his wife was eaten by a shark. Three guesses whether this might prove relevant at some point. The rest of the cast are fairly bland, save for irritating mogul Sonny (Yang). He does demonstrate an aquatic version of the old adage about not having to out-run the bear, just the person next to you.

The shark is surprisingly decent, a no-nonsense, largely CGI creation, which does not muck about. When it bites you, you stay bitten, typically succumbing quickly in an enthusiastic wash of computer-generated blood. The peak moment is likely when it leaps through the hole the characters knocked out, in order to reach the foyer. Chris and I simultaneously went “Whoa!”, in our best “Keanu Reeves narrowly avoiding being eaten by a shark” impressions. To be honest, I’d have liked to see more of the big fish, and less of the probing of moist back passages (oo-err missus!) and arguing.

A few more deaths wouldn’t be amiss either. I was amused to find that the Chinese version of “the black guy dies first” appears,  on the basis of this at least, to be “the white chick dies first”. The example here pretty much sealed her death warrant, the moment she climbed out of the limo. Everything thereafter does tend to follow, as one would expect. For instance, the speed and hunger of the creature is largely determined by whether or not it is chasing a main or supporting character. At a terse 66 minutes, this is never going to outstay its welcome. However, I’d like to have seen more local flavour, rather than something which feels like a Chinese clone of a SyFy original movie. Albeit one with better production values than most of those.