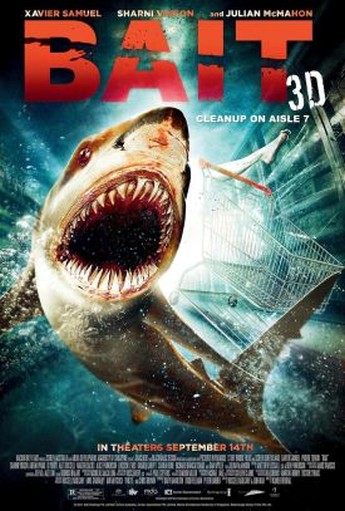 So, we’ve had sharks in tornados, sharks crossed with octopi, what else might there be? How about sharks in a supermarket? That’s the premise of this Australian, and shamelessly 3D, entry in the genre: a tsunami floods an underground supermarket, and brings with it some of the local ocean residents, who proceed to prowl the aisles. And they’re not looking for 20% off washing detergent. Perched on top of the shelves, trying to figure out how to escape the rising waters without becoming shark bait, are a motley selection of humans. There’s former lifeguard Josh (Samuel), who feels guilt for having caused the death of his fiancee’s brother. Shoplifter Jaime (Tonkins), who is about to be carted off by her policeman father, when an armed robbery breaks out, executed by Doyle (McMahon) and his partner. Which is when the sharks surf their way into the produce department. Naturally, the more unpleasant character, the worse the fate, though the irritating young couple and their yappy dog (or is it, irritating yappy couple and their young dog?) in the car-park survive far longer than they should.

Let’s be honest, this is death porn, whose closest cousin is probably Final Destination: we want to see gruesome endings – particularly where the sharks are coming out of the screen. The film certainly delivers some impressive moments here, though the sheer stupidity of the characters in some cases renders their deaths an exercise in Darwinism at work. [I mean, constructing an anti-shark suit out of shopping baskets and tin cans? Yeah, like that’ll work…] It does suffer significantly from Jurassic Park 3: The Lost World syndrome, with the sharks purely attacking at dramatically convenient moments, then vanishing who knows where until they’re next required. and some of the CGI is unconvincing, not least for the opening tsunami. But it moves briskly, the characters generally tread a nice line between being annoying and over-drawn [let’s face it, we really don’t care] and if the premise likely doesn’t stand up to close scrutiny, it’s executed with enough youthful energy to paper over the cracks.