Having possibly the greatest title in the history of Lovecraftian cinema leaves this film with a lot to live up. That it falls short is probably inevitable, but there’s still enough inventiveness here to make for a goofily low-budget time. The hero is Carter Wilcox (Carollo), a virginal geek who shares a house with wannabe musician Erica (le Faye), but lusts after Riley (O’Brien), whom he sees out his window. But, wouldn’t you know it, the good news is, it turns out Riley is an escort, so is rather more attainable than Carter thought. The bad news? A interestingly-shaped blemish on her bum, has Riley sought after by a pack of Cthulhu cultists, who believe that makes her the bride of their Old One. Of course, it could be the case that impregnating her with an eldritch horror might have a detrimental effect on those with whom she cavorts: Cthulhu as STD. So, as well as seeking Riley, Carter and Erica also have to handle her infected clients. 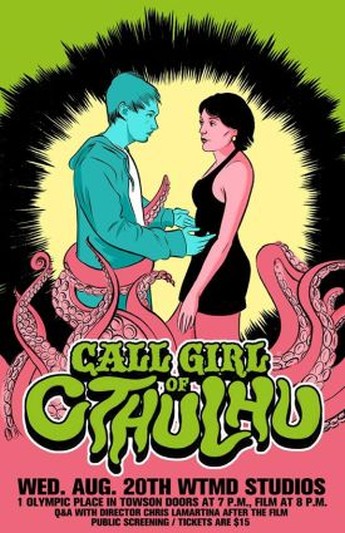 Trying to produce a credible nameless horror, given a total budget ($40,000) which might – just, might – cover the catering budget on Cloverfield for a week is always going to be a stretch. And the film is weakest when it’s at its biggest, with effects which fall into the “Good effort!” category rather than anything convincing, leaving the balance of this horror-comedy firmly tilted away from the former. Fortunately, the script is generally smart enough to make you want to look past the flaws, with some sly nods to Lovecraft, in things such as an online camgirl called Missy Katonixx, or ‘Deep Ones’ branded condoms. It’s clear LaMartina and co-writer Jimmy George love them some mythos. And, of course, the entire concept of female sexuality as evil, would have been right up Lovecraft’s dimly-lit street, given his anxieties over sex and women.

More than one previous review has compared this to a Troma product, and that’s a valid point, with more than a hint of the “aroma de Troma” to this, in its cheerfully low-budget excess, and failure to give a shit. Of course, that’s a bit of a double-edged sword, and there are times when the amateur background of the actors is obvious – in particular, they might have benefited from someone with a bit more cinematic experience than Carollo as the hero. But there’s no denying the enthusiasm of those involved, and that helps allow the end product to skate by, probably better than most films with such small funding. Is it great cinema? Hell, no. Is it even good cinema? Debatable. But for anyone occupying the intersection of Lovecraft and trash, it’s certainly fun, even if it doesn’t appear to have any higher aims than that.