You don’t really need to know this, but the film is apparently a spin-off side story, from a TV series called Reunion: Sound of the Providence, in particular giving a lead role to supporting character Hei Yan Jing (Chen). I have to say, he’s probably the best thing about this, possessing cool at almost superhuman levels. Even when faced with things that would leave a normal person shaking in their boots, he wears sunglasses everywhere. Night-time? Deep underground in a cave? Absolutely. Turns out there is an explanation, in that he’s sensitive to light, and has a condition which means he can see better, the darker it is. I found that a bit disappointing: “because it’s cool” would have been more fun, At one point, he does take them off, allowing other characters, but not the audience, to see his eyes. Going by their shocked experience, I’m going with Riddick in Pitch Black. 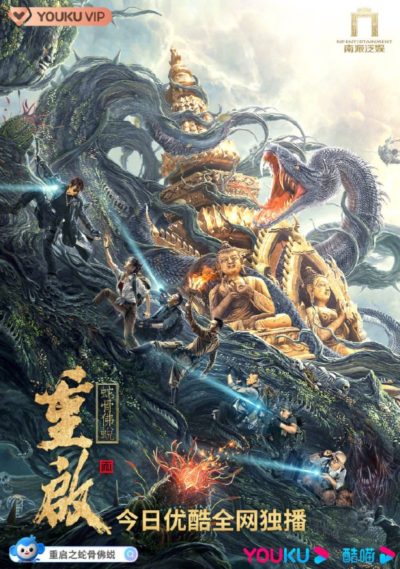 Anyway, he ends up hired to go deep into the Cambodian jungle, after contact is lost with an expedition sent there by Japanese businessman Huang Xie (Ming). Also part of the rescue party is Gu Zi Qing (Chang), the daughter of the expedition’s leader. In contrast to some entries, this keeps its creatures well in the background to start with, it’s probably thirty minutes or so before we get a proper look at one. That’s the “monstrous snake” of the title, though in comparison to others we’ve seen in this series, it feels like the “No, we have monstrous snake at home” entrant, being only slightly larger than nature intended. However, that’s okay, because the title is a bait and switch. Or snake and bitch, if you prefer. For the real monster, which occupies most of the second half, is actually a “snake cypress”, a plant whose tenticular vines can hurtle around the jungle at high speed, crushing anyone they entangle.

Huang needs it to cure a terminal disease with which he is infected. However, that process would allow it to spore, infecting a much broader area. I’m not quite sure how: something to do with golden pagodas. It may have been lost in the subtitling. While the snake cypress CGI is no great shakes, and chunks of the plot felt over-familiar, the fact this was still able to provide unexpected twists did keep me watching to the end. In Jing, the film has one of the few characters from these films which will genuinely stick in my mind. Usually, it’s the monsters that are the stars: here, we get a hero that’s just as much larger than life. Any time Jing is on screen, things seem to acquire additional energy. This helped to balance the more forgettable elements, and means it will probably live on in my memory a bit longer than some of the entries in the series.