Maybe it’s presumptuous of me, but when you literally call your movie “Arizona”, I tend to think you should film there. It’s not exactly the other side of the world: make a right out of Los Angeles, keep going for a couple of hours, and there you are. I feel obliged to explain this, since the makers of this appear unsure of their geography. The end credits offer thanks to the cities of Albuquerque and Rio Rancho. These are in the state of New Mexico. Adding insult to injury, the gear trucks probably drove through the real Arizona to reach their fictional location. At least make some effort to sell the illusion. The total lack of saguaro cactii in this Arizona is a dead giveaway. 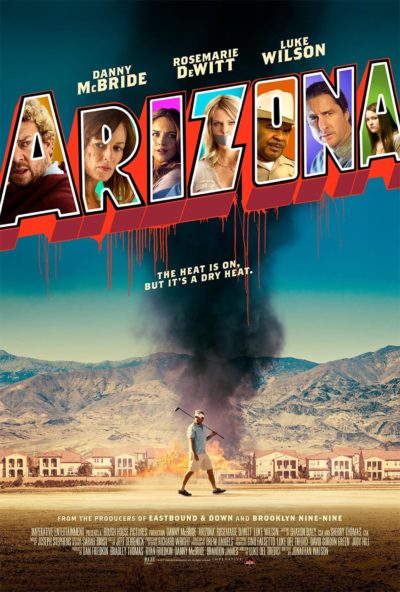 It takes place during the real-estate crash in 2008, which in this film hit the state especially hard. Having had our house foreclosed on around that time, I can’t exactly argue. Though the specifics here – vast, near-deserted housing estates, abandoned by their developers – seem more cinematic conceit than a depiction based in reality. Or even realty. For the heroine here is Cassie (DeWitt), a struggling realtor and single mom, largely failing to keep her head above water in the ghost new town of Harding. Things go from bad to much, much worse when a fight between her asshole boss (a Seth Rogan cameo) and customer Sonny (McBride) escalates into fatality. Cassie is taken hostage by the unpredictable and heavily-armed Sonny, imperilling her, teenage daughter Morgan (Sorenson), and even estranged husband Scott (Wilson).

It’s a brutal and somewhat mean-spirited work, largely populated by troubled and/or unpleasant characters. There’s hardly a relationship here which you would call other than dysfunctional. The one which works best, between Cassie and Morgan, does so largely because it works least. When death or injury show, and they frequently do, it’s usually abruptly, thanks largely to Sonny’s temper, which can go from zero to golf-club in the blink of an eye. It does get somewhat repetitive: somebody shows up, and Sonny has to dispose of them. However, the setting is definitely eerie, like a zombie post-apocalyptic world, only missing the zombies.

McBride’s performance is largely one-note, yet it’s quite an effective note. It plays like a more chatty version of the villain in a slasher movie, popping up to threaten the heroine as and when necessary. DeWitt does get to show a bit more nuance, in a character who is a victim of financial shenanigans way above her level. On the other hand, Wilson seems especially wasted and the abrupt way in which he exits the film, without fanfare, suggests the makers realized this. With Arizona currently enjoying a ferocious real-estate surge (hey, we’re looking to downsize and are certainly fine with our house price surging), the concept here feels strangely alien and about 6-7 years too late. While not without its merits, this feels very much like a case of wrong time, and particularly wrong place.