As well as the title creature, there are a couple of interesting ideas here, which mean the film doesn’t have to rely on just a big reptile for the entire 85-minute running time. That’s probably wise on a couple of levels, not the least of which is the poor quality of the CGI on the megacroc. It seems to have the shade and texture of a toy bought from a dollar store, and about the same degree of articulation. Though an ability to jump on land, like an Olympic athlete, was certainly unexpected given its size. I half-expected an explanation that scientists had infused it with kangaroo DNA or something. 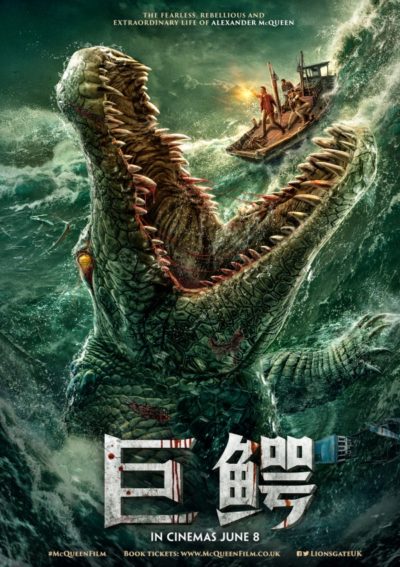 This takes place on the appropriately named Hell Island. Alcoholic crocodile researcher Luo Han (Li) is hired by the chairwoman of an industrial conglomerate Kong Mingzhu (Guo), after one of her relatives goes missing in the area. Luo, meanwhile, is similarly suffering from recent loss, which is what drove him to drink. It seems a thoroughly badly-thought out plan, Luo leaping out of a plane without even a parachute, and everyone else just kinda follows. What about equipment? How were they going to get back? In any case, they quickly find the island is well-named: not just for the crocodiles, as it’s also home to carnivorous plants (though these are little better animated than the reptiles).

A twist follows, in that they discover a giant research facility buried underground, which is the apparent source of the megacroc. part of a project to extract cancer-curing medicine from them [if this sounds familiar, it was also part of the plot of Land Shark] This is where the film’s creepiest scene takes place, when they stumble across a figure that’s just saying “Help… Help…” repeatedly. Turns out, she is being controlled by beetles that imitate the human voice. Before you can say, “Wait, what?”, the film has moved on, never to reference them again. To be honest, the beetles are superior actors to the woeful English-speaking actors that are part of Kong’s merc bodyguards, and the Chinese actors also speak the language better. Mind you, the English subs leave a bit to be desired, though I did learn a new word. “intermeddled”, which is apparently a cross between interfering and meddling.

Initially, I was quite hopeful, after an opening scene which has more splatter than usual for the genre, with people losing limbs. It doesn’t sustain this, and there are a significant number of “oh, really?” moments thereafter. The moment the survivors are trapped on the edge of a cliff… where there just happen to be barrels of explosive material stacked… I knew where this was going. Though to the movie’s credit, I did not expect the Flaming, Cliff-climbing Crocodile of Doom which followed. This creature has skillz. The start and finish can’t overcome the general mediocrity of all that’s in the middle. Though I await with interest the follow-up, MAGA Crocodile, in which the reptile owns the libs by eating them.