If you’ve been following my reviews, you’ll notice I don’t typically give much mention of the special effect quality in these kind of films. It kinda goes with the territory that these are not going to be WETA level, but in most cases they are adequate enough for the job. Here though? Hoo-boy. It’s difficult to accept this film was made in the twenty twenties, because I could point to films made two decades ago which were considerably better. At no point does it look like the creatures in question are other than crudely painted on top of the live-action footage. The title creatures are bad, but worst of all is the attack on a boat by a pack of bats – a sequence clearly borrowed from Snakes flying butterfish – which rivals the dreaded HoverBatTM for sheer crappiness. 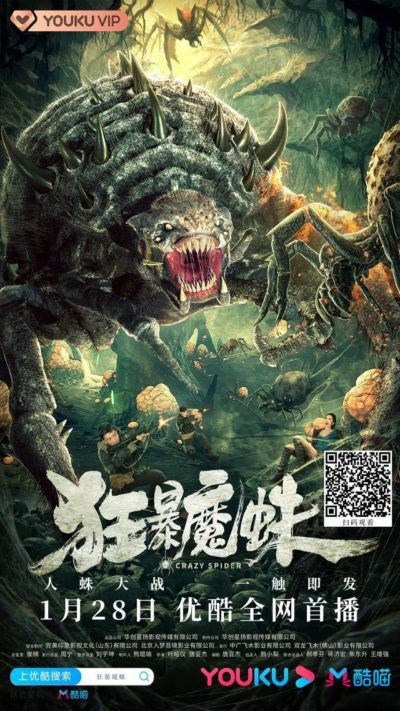 In general though, this is in line with the underwhelming nature of the plot, characters and direction. After a young couple go missing on Spider Island – I’d say that name was a red flag, right there – their fathers team up for a rescue expedition. They are industrialist Du Yuan Sheng (Ren) and former employee, researcher Jiang Zhe (Wang), who soon discover their destination does indeed live up to its label. This should not exactly be a surprise, since they were responsible for the giant spiders being there, the leftovers of a project led by Jiang, to find a way to dispose of plastic waste. About which he now feels really guilty, the creatures having killed a couple of friends while still in the laboratory.

I think the most shameless thing here is the way it rips off Aliens. My suspicions were first raised when the spiders turn out to have acid for blood. We then get the gung-ho team of soldiers accompanying the civilians, more than one of whom bravely sacrifice themselves by holding onto a grenade. The spiders’ lair, where victims have been cocooned  and used as hosts. The evil company man trying to smuggle a sample back to the civilized world, regardless of the risks. However, lifting from one of the best monster movies of all time is likely unwise, when a film is so woefully ill-equipped. It only shows up your own shortcomings.

There’s certainly no lack of those. At one point, the spiders even trumpet like elephants, and for one glorious moment made us think we were going to see a pachyderm stuck in a giant spider’s web. No such luck. Instead, this plods its way in utterly predictable fashion towards its dull, poorly-staged climax on the docks. Though it grinds completely to a halt prior to this, in favour of sitting around an abandoned boat, chatting. It feels as if the makers suddenly realized they only had 50 minutes of material and needed to pad it, to reach the bare minimum feature length. I wish they hadn’t bothered.