Well, it is a Netflix film and with that mild sense of dread set, let’s dig in, and it’s welcome to Philadelphia in 2024 where things are going very badly. Erm… 1988 instead?  Yes, let’s pop back there, where things are… oh… not much better with people dropping like flies as their brains dissolve and dribble unbidden from their heads.  Yup, it looks like it’s going to be a long night.

Okay.  Let’s get the elephant out of the room.  Yes it is Dexter with a police detective’s badge, and yes it feels as odd to experience as it does to write.  As it turns out Dexter, sorry Hall…. erm… …Holt is our protagonist’s ‘jerk’ brother-in-law.  Street-cop Thomas Locke (Holbrook) is married to Holt’s sister, who is nascently pregnant.  Locke’s partner in crime (erm… fighting…) is Maddox (Woodbine) and whilst we all get acquainted, across the city, brains are busy dribbling.

Good pace.  This film jogs along at a spritely clip with little by way of padding.  It’s nicely, crisply shot and has quite a bit of neat and snappy dialogue all the way through, as grabbing the procedural BS by the horns Locke and Maddox decide to play the events freestyle as…

“…This is our chance at detective…” explains Locke as he swerves another rule.
“I’m thinking I got the wrong skin tone for that!”
“But you’ve got that sparkling personality…”
“Shiiit…” 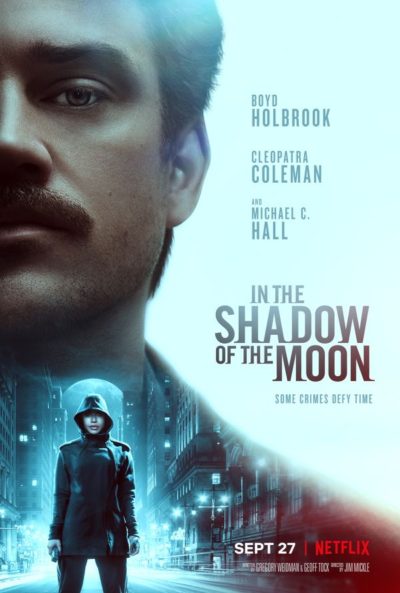 Anyhoo, though a combination of luck and general policing the antagonist is spotted and the pace really picks up, with lots of police people shouting into their radios “..she’s here…!” whilst often failing to say where they are.  Not that it matters much as, oh dear, she’s a parkour ninja.  Of course.  And so there are lots of flat-footed police left in her wake before our not-quite-so dynamic duo hone in on her.  As it turns out, she knows far too much about Thomas than is possible as the pace, tone, sound, everything changes, as violently hard the buffers brutally greet our arrival.  And she ends up under a train.  Non-spoiler alert, she comes out second-best.  Third-best if you include the rails.

1997 finds our now rather polished-looking detectives working for Lieutenant Dexter Holt, as in the background ‘Black Lives Matter’ are protesting the 9th anniversary of the as yet unknown black woman who died under a train.  It is also the anniversary that is a birthday, and a death-day.

“Why are they so mad?” Locke’s daughter asks.
“Some people aren’t happy unless they’re mad.”

And in other news, yet more brains are falling from skulls as we hit a vaguely Hill Street Blues ‘procedural policing’ patch.  You remember that?  Evidence, investigation and discovery?  Yeah, I know, odd in a 2019 action-flick right?  Don’t worry, it soon passes, for it’s Lunar Perigee and…

“…every nine years, when the moon sets, I can come back, but not for long… See you soon.”

2006 finds Locke an alcoholic PI. An obsessed alcoholic PI. Which is nice, as clearly this has no scope for things going wrong. Probably. 2015 finds… mmm… yummy bacon… and… well, best I stop there.

The film is two hours long but doesn’t feel it, it races by, even if some of the kinetic action scenes are farcical with seemingly an alarming number of people able to run at the same speed as cars and motorbikes.  Some of these scenes also feel a bit interminable, with a bit too much cut-cut-cutting confusing things.  And for those of you mumbling, no, I am not going to explain the plot. Doing so would definitely detract from what is a very solid and enjoyable film.  It is also a film that rewards paying pretty close attention to, as there are quite a few visual clues and story-telling dotted here and there.

The ending is sad, poignant, and quietly done.  Unfussy even.  And perhaps oddly, overall the film is a bit like that.  Quietly busy, with some calm tranquil oases along the way.  From my notes at the end “Low key”, and I can imagine that the ending won’t please some in its very un-Hollywood bitter/sweet/very bitter manner.

I liked this film.  It’s not going to live long in your memory, but it’s well done, well shot, well acted and has a cute story, and upon minor reflection my ‘B’ gained a ‘+’. Overall, it’s well worth a watch.