I didn’t dislike this quite as much as my original review (below) would suggest. But it’s still got problems. Most obviously, there’s a drinking game to be played, with you downing a shot for every crappy bat effect. Do two for each appearance of HoverBattm. It’s the one which flaps its wings, while bobbing up and down in place like some kind of  chiroptera/helicopter crossbreed. It feels as if, every time the film is getting somewhere and generating palpable atmosphere, HoverBattm shows up to bring things back to earth.

This happens almost from the start, where Count Dracula (Lee) is resurrected by a bat puking up blood onto his ashes. It’s among the most ludicrous and embarrassing moments in the entire canon. That’s a pity, as it’s followed by one of the most memorable. A mob of villagers, led by the local inn-keeper (Michael Ripper, natch), have finally plucked up the collective courage to storm Dracula’s castle. Overpowering his minion, Klove (Troughton), they set it ablaze. Yet they make the fatal mistake of failing to confirm the Count is dead. Returning to town, they find the women and children left secure in the local church have all been brutally slain. I’m not sure if this was by Dracula or his bat minions. But what is clear, is that this Count isn’t messing about. “The Devil has won,” mutters a local priest. He’s not wrong. 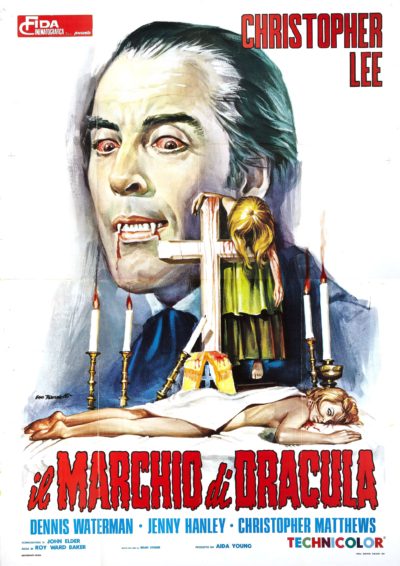 The abrupt shifts in tone continue. A few minutes later, we’re in bedroom farce territory, as Paul Carlson must make a rapid exit from the bedroom of the burgomaster’s daughter. [The burgomaster, appropriately, is played by Benny Hill regular, Bob Todd] He ends up in Dracula’s castle, and his disappearance provokes an investigation by his brother, Simon (Waterman) and his fiancée, Sarah (Hanley). They track Paul to the village, where despite opposition from the landlord, Simon discovers the castle was his brother’s final destination. There, they get assistance from an unexpected source. For Klove, having seen a picture of Sarah among Paul’s possessions, has fallen for her, and is prepared to defy his master in defense of her.

Among the positives are Lee, who gets to do more than in most of the sequels. The thread involving Paul’s capture feels very close to the early sections of Bram Stoker’s original novel, complete with Dracula walking up the castle walls, depicted in a simple yet effective way. Waterman, too, makes for a better than usual young, male lead. He obviously cares for his brother and is prepared to put his own neck on the line (literally, I guess…) to save him. While the glamour is considerably more clad than last week, there’s not one but two former Bond girls among the generally pleasing female cast. Both Hanley and Anoushka Hempel, who plays Dracula’s original “bride”, were among Blofeld’s patients in On Her Majesty’s Secret Service the previous year.

However, this was made at a point when Hammer were struggling to find investment partners. Their American co-production deals had ended, and while many of the studio’s earlier titles were pre-sold to the US, this had severe trouble finding a distributor in the United States. The lack of resources is frequently obvious, no more clearly than the woeful embarrassments which are HoverBattm and his pals. They would have looked ropey in a 1930’s poverty row production. I just cannot see how anyone could possibly have looked at them in the seventies and concluded, “Yes, that’s good enough.” At a time when horror was becoming more polished and mainstream, post Rosemary’s Baby, it’s easy to see why this floundered.

If lighter on the sex than Lovers, it doesn’t skimp on the violence. Beyond the opening church massacre, Dracula is particularly unpleasant to Klove, branding his back with a red-hot sword, and also stabs one victim to death, rather than using his fangs. [Footage of him lapping up the resulting blood was reportedly excised by the BBFC and now appears lost] Klove dismembers a body with a charming selection of hand tools, and even the savaging of a victim by HoverBattm is rather extended. Although the target ends up looking lightly-nibbled or afflicted by a bad skin condition, rather than torn apart. 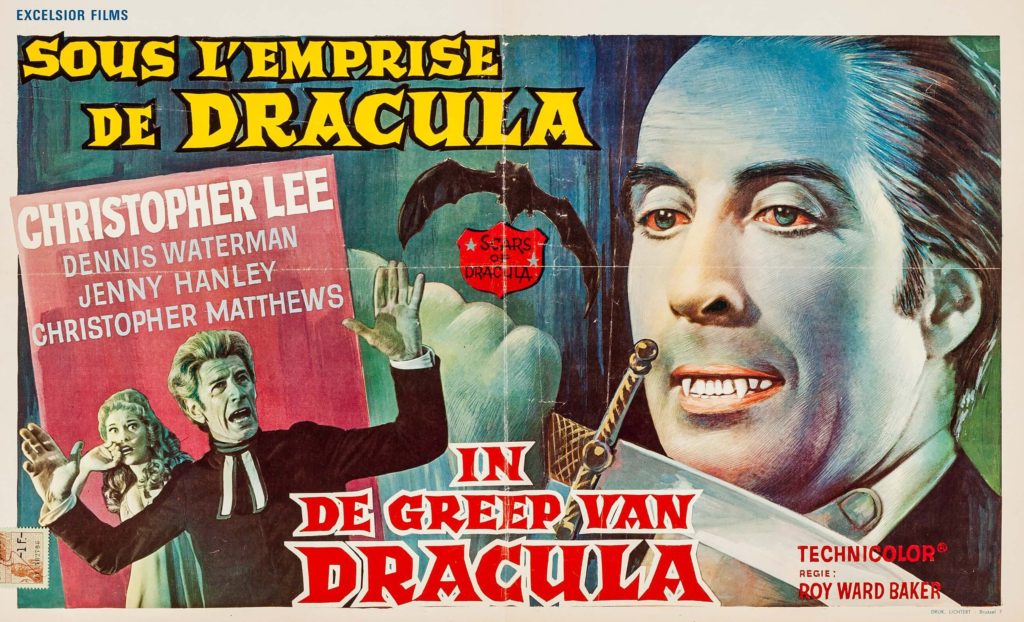 I think outside of the low production value, the main issue is the unevenness of the approach. It feels as if the movie is being pulled in a variety of different directions, from a faithful adaptation of the novel, though grindhouse horror to bedroom romp. Individual parts work reasonably well, yet as a whole, it’s not very satisfying. This would be the last hurrah for a “traditional” Dracula film from the studio, and I can see why they felt the need for a radical change in direction.

[Original review] Anchor Bay’s pristine DVD transfer is rather more than the technical aspects of this film deserve, since it contains some appallingly bad day-for-night shooting, and the most pathetic bat effect of the past fifty years. These detract horribly from a movie that’s actually closer to the original story than most Hammer versions. A young man ends up in Dracula’s castle, from where his brother (Waterman) and the inevitable Gothic-cleavaged squeeze (Hanley) must rescue him, despite the local villagers’ reluctance to get involved.

There are some decent touches, such as the human servant (Troughton) rebelling against his master, after being touched by Hanley’s beauty, and the luscious red interior of the castle adds to a general style and look which is fabulous. Lee delivers his usual fine performance, but if you can’t help expecting Waterman to slam Dracula up against the wall and shout, “You’re nicked, my son!”, that’s scarcely Hammer’s fault.

The bat, on the other hand, is entirely their responsibility, and is so woefully inadequate that it’s impossible to take the film seriously. In a genre where suspension of disbelief is crucial, it comes very close to wrecking the entire film. C-