This entry takes beloved martial-arts teacher Ip Man (Yen) out of Hong Kong, as he travels to San Francisco in 1964. This is partly to see his student, Bruce Lee (Chan), but mostly to try and find a school for his teenage son, recently expelled from his one at home. The latter requires a recommendation letter from the Chinese Benevolent Association, signed by leader Wan Zhong-hua (Wa). And that’s an issue, because Wan is pissed at Lee, for teaching martial arts to Westerners – and Ip agrees with Lee. Ip rescues Wan’s daughter from school bullies, yet this triggers problems with the authorities. There is also a thoroughly racist Marine Sergeant (Adkins), whose karate skills prove more than a match for Wan. Can Ip restore Chinese honour? 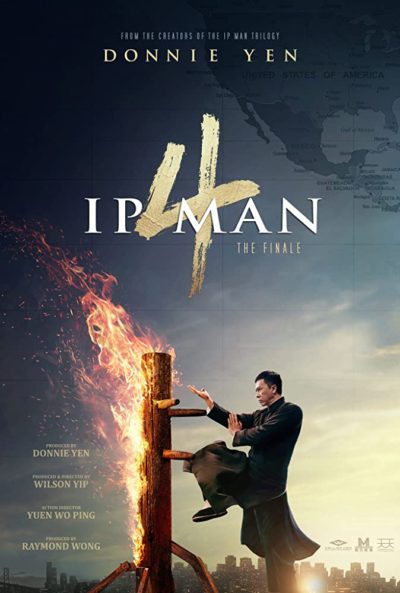 I don’t recall if I’ve seen any of the entries in the franchise since the original, though did catch Master Z: Ip Man Legacy. With action choreography by Yuen Wo-Ping, as in Ip Man 3, that aspect is as good as you would expect. Yen seems to have hardly lost any pace since his career began, back in the eighties.  [I wonder if they are under-cranking the camera more, to compensate? Some of his punch blitzes seemed insanely quick] But Chan does an excellent job of capturing the style and techniques of Bruce Lee too. Had this been the mid-seventies, he could have had a great career as a post-mortem Lee impersonator, called Bryce Lu or something. Adkins does his part as well, delivering a more formal fighting style, though little if any less hard-hitting, than we saw in Avengement.

So why the merely mediocre grade? Much as with the original, it’s the non-violent bits which remain the problem. The storyline is simplistic, barely an excuse to link the fight scenes. The only genuine emotional strand is Ip’s effort to reconnect with his delinquent son, and this happens solely due to plot cancer, without the kid experiencing any particular change. This is still better than the wafer-thin characters. I was informed by Twitter that these are enlightened times, and there is no place in modern cinema for crude stereotypes. Yet literally every Caucasian – and this being largely set in America, there’s no shortage of them – is a racist fuck.

The title states this is the last entry in the Ip Man series, and it seems likely, with the last scene being his funeral. That seems a bit rushed, considering he lived for eight more years after the events depicted here. I’m sure the makers could have had him win the Vietnam War against the evil Westerners, or tell the story of Ip taking a gold medal at the 1968 Olympics, and raising his fist in a Black Power salute on the podium. While this is still worth a look for the martial prowess of the participants, do not make the mistake of taking it even slightly seriously. Otherwise, your head may well explode with the stupidity of it all.