Man, I hated this one when I originally reviewed it (see below). Now? I guess I’ve mellowed out. Or been desensitized. Or something. The cannibal genre still remains one of little interest in general to me, and this – probably the most renowned entry, along with Cannibal Holocaust – illustrates why. There’s just too much slack, and the occasional gross-out moments are precious little recompense for the viewer.

Initially, I wondered if this was the wrong movie, as it opened with a funky disco score over New York footage. Not having seen this in thirty years, I’d forgotten all about these sequences, in which a junkie goes to score in an apartment. He’s gunned down by two mobsters, looking for the resident, who ripped them off for a hundred grand in heroin, before vanishing. The relevance of this will eventually become clear, though the necessity of these scenes remains questionable. Meanwhile, in South America, doctoral student Gloria (De Selle) is on a research trip with brother Rudy (Redford), and their friend Pat (Kerowa), who appears under the assumption this is the Glamazon rather than the Amazon. Y’know, it’s like the Amazon, but with hot showers ‘n’ stuff. 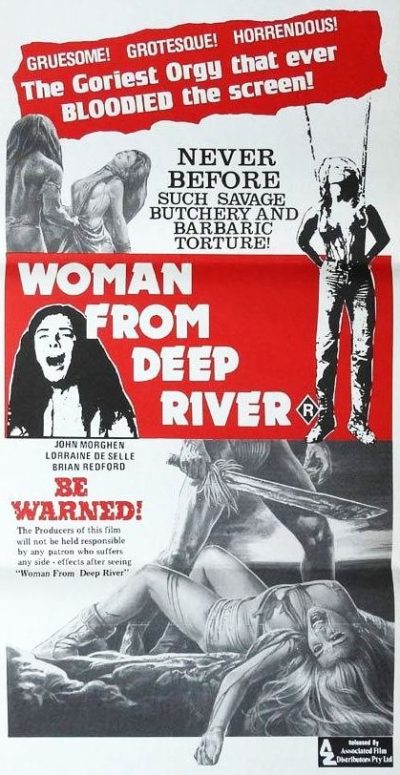 Gloria’s thesis is that cannibalism is a myth. She calls it, “An invention of racist colonialism which had a vested interest in creating the myth of the ferocious subhuman savage fit only for extermination.” I guess college students could be woke idiots back in the eighties, too. Of course, we viewers, having rented a movie with the word “cannibal” in the title, know better. She’s heading to an area where there have been reports of the practice, to prove them false. Good luck with that. When the party’s jeep grinds to a halt, they proceed on foot, and encounter Mike (Morghen) and his injured friend, Joe. They have just escaped the clutches of the locals, and tell of their guide having been eaten.

The sensible thing would be to nope the fuck out of there and revise her thesis. But Gloria? #NeverthelessShePersisted, plunging on into the jungle. The reality is, Mike is the New York heroin thief mentioned earlier, now on a coke-driven search for emeralds, by any means necessary. His behaviour to the natives is what triggered their violent reaction, and relations grow even chillier when he guns down a local girl. The locals are now out for blood, and the lucky ones will die first. The unlucky ones? Penis severing; piranha munching; dangling from hooks; or getting the top of their head sliced off. and becoming a bowl of brain guacamole. Gloria survives, but recounts a lie about a canoe accident, and gets her doctorate, still proclaiming cannibalism a myth.

The genuine animal cruelty is perhaps the most problematic element, even if much of it is “nature in the raw” such as a jaguar eating a monkey. Presuming you’ve watched BBC wildlife documentaries, you’ll have seen worse; the most dodgy sequence is where Mike leaps into a pit and repeatedly stabs a pig. If Lenzi had taken the same approach to the humans, and genuinely had them killed and eaten, I’d have had to applaud his consistency. But as is, these scenes appear to have strayed in from another disreputable Italian genre, the mondo movie. The brain eating finale, using a table with a hole through which the victim’s cranium pokes, seems particularly inspired by the monkey meal in Faces of Death, two years previously. I was impressed the tribe went to such specific lengths in their carpentry. Or maybe that kind of table is available at the Amazonian IKEA, in flat-pack form.

While the effects are generally solid, the only one which still looks particularly impressive is the corpse that gets disembowelled for a passing snack. The rest tend to be seen in quick cuts e.g. the penis severing, or are kinda obvious, like the danging from hooks. Certainly, entertainment has moved on considerably since, and this is likely less gory than some episodes of The Walking Dead. On the other hand, entertainment has also moved on, in that the shameless exploitation of indigenous people would no longer be tolerated, even if Gino De Rossi, the film’s FX guy, says that after shooting, they’d switch back to wearing T-shirts and hang out with the film-makers, drinking beer. Pretty chill for cannibals, really. Their non-actingis actually fairly effective, with the lack of emotion shown in their dismemberment, rather chilling. 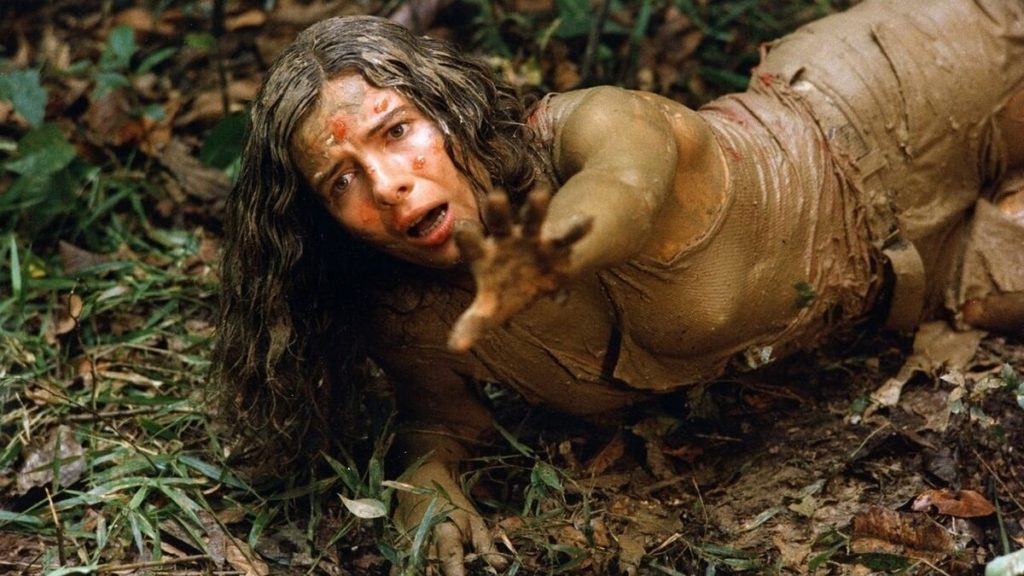 The big problem though, is the film doesn’t have much to offer, except for shock value. It’s plagued by sloppiness, with multiple occasions where the dialogue doesn’t match what’s on screen. For instance, a character describes Mike’s watch as having initials on the back, when it’s clearly his full name. Or Lieutenant Rizzo says he’s from the 17th precinct, and the next shot shows the exterior of the 23rd precinct. Its impact is likely also diminished by the near-total lack of empathy for the characters, who are as unlikable a bunch as ever to go on a trip. This may be deliberate, to some extent – certainly so, in the case of Mike, where Morghen’s twitchiness is the closest the film gets to a real performance. I just can’t help wishing he had been Klaus Kinski.

In the end, this just didn’t move the needle much for me. I’m clearly old and jaded now, rather than being the Angry Young Man I was, when I originally wrote about the movie. I blame the Internet.

[3] Sums up all that’s worst about Italian ‘horror’ films. Totally pedestrian direction, diabolical plotline and rotten effects almost make this a candidate for the Incredibly Bad section, with the highlight being two women captured by the cannibals indulging in a spot of community singing to raise their spirits. Purporting to be social comment about whether we are more civilised than the savages, the only question it raised in my mind was ‘Why do cannibals in Italian pictures only ever eat intestines or brains?” Unfortunately, there are some totally pointless scenes involving cruelty to animals which mean it probably does deserve to be banned. Someone tell these people there’s more to the horror genre than being unpleasant to furry things. 2/10