It’s bad enough that, in 1982, Taiwan would produce a shameless copy of Ms. 45, called Pi li da niu, a.k.a. Red Fury or Girl With a Gun. Actually, as mockbusters go, it’s not awful, being faithful enough to the original, though this renders it entirely superfluous. It would have been best forgotten by all concerned, except that six years later, infamous schlockmeister Ho got hold of it. He apparently thought, “Well, it wasn’t bad, but what this Taiwanese knock-off needs is clearly… devil worshippers.” And so, that’s what he did. For this combines wedges of footage from the film, with separate and independent footage, edited together into something best described as a curious mess. There’s a reason this only appears available in German language, which simply adds to the bizarre nature of the entire production.

After the opening credits, unfolding behind a sprightly electropop tune, it wastes no time, throwing us right into a sex scene. Who are these people? Why are they having sex? Ho does not care about such trifles. Instead, we are left to contemplate the woman’s hairy armpits, which had me having flashbacks to Nena circa 1984. Afterwards, the man enjoys a post-coital cigarette, right up to the point it apparently poisons him. The woman draws a triangle in a circle on his chest then kills herself. The police, led by Detective Neal Brown (Kirby), are baffled. And so are we. Turns out, this is just the latest in a series of similar ritual killings, all committed by women.

We then cut to the heroine of Girl With a Gun, working in a garment factory. Before we know her name, action shifts to a Satanic cult, wearing blue T-shirts with the same symbol as on the dead guy. To be honest, they look more like an early incarnation of D.A.F. than a cult, not least because of the make-up lines drawn on their forehead. After a ritual based around stabbing a watermelon – they don’t make Satanists like they used to – we learn they are responsible for manipulating the women into committing the murders. They now want to focus on one special target: garment factory worker Audrey Lang (Hsia), a patient of the cult leader, Dr. Oliver. Audrey is also mute, making her “the ideal disciple of the Devil.” 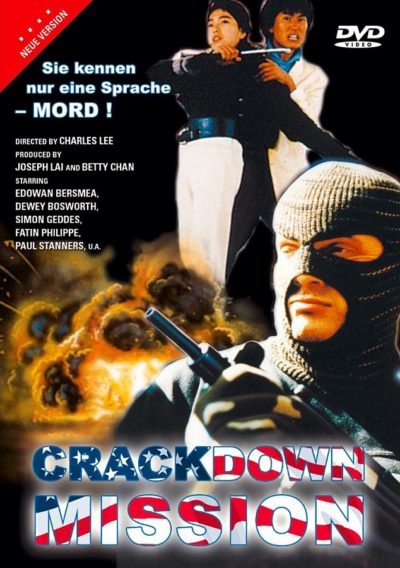 If you’ve seen Ms. 45, you’ll know what happens next. On her way home from work, Audrey is raped, then on reaching her home, is attacked again – in this mutant version presumably, though it’s never stated, on the orders of the cult. She fights back, killing her second attacker, and cuts up his body. Crackdown largely skips the details, showing the process in negative, for… reasons. Which makes a later scene where she is pointedly dropping off garbage bags into trash cans around town, a bit obscurist. Back in the new footage, the cops have discovered the women killers were all in therapy, while gazing out over the ocean. Because that’s how police work, works.

Det. Brown pays a visit to Dr. Oliver, who cites patient confidentiality and shuts them down.  He professes to be an atheist, and denies seeing the symbol, but he and his henchman agree the policeman is getting too close, and must be stopped. Audrey, meanwhile, is beginning to crack as she disposes of the evidence. Matters aren’t helped when she’s caught while doing so, and another sleazy Taiwanese man must bite the dust, when he he chases after her with one of her bags. This brings things to the attention of the local police in the original movie, who have a telephone conversation with Det. Brown in the other film, and get handed a report from him telling of the “fanatic cult” he believes is responsible. Y’know, I begin to admire the invention needed to connect the disparate footage.

Some of the discarded body parts turn up, and the cult tries to kill Det. Brown, because that’s the best way to stop a murder investigation. Some random woman helps him escape, this being Hong Kong, where everyone knows kung-fu. Audrey kills a photographer, in another scene lifted almost wholesale from Ms. 45, and a further assassination attempt fails, the assassin hitting Brown’s partner with his weapon of choice, a crossbow. Because crossbows are cool. Audrey is now having visions of Dr. Oliver, hypnotizing her to kill and saying she is Lucifer’s daughter. However, they don’t seem bothered who Audrey kills, and she just wanders the streets taking out random scumbags. Maybe they should have sent her after Det. Brown, who is the one specific guy the cult actually want dead. 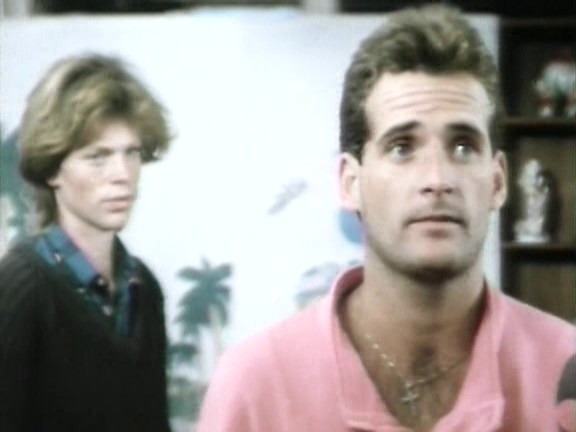 The middle of the film is almost entirely taken from Girl With a Gun, and features further re-stagings of sequences from Ms. 45, staged without an ounce of Abel Ferrara’s panache. [Read that with as much sarcasm as you feel appropriate] So, there’s Audrey vs. a street gang, Audrey vs. a guy who mistakes her for a hooker, etc. Though I did like the scene where she feeds burglar bits to her cat. Det. Brown has linked all of her crimes to the cult killings, for no better reason than “I think the murderer is a woman.” Good luck making that stand up in court. Despite a similar lack of evidence, the police focus in on Audrey. But first, Brown has to fight a pair of kung-fu trained psychologists. That’s a sentence I did not expect to be writing when I started this film.

Audrey goes to a bar and listens to a bootleg version of Cat Stevens’s Moon Shadow.  Sadly, the scene from Girl With a Gun where she finds a support group and is moved by their rendition of He’s Got The Whole World in his Hands, did not make the final cut here. Instead, she is interviewed by Det. Brown, which is quite a feat, considering they are not in the same movie. It helps that she is mute, and just… stares off to one side, before leaving. The policeman shrugs and moves on. Audrey is clearly building up to her party piece, doing the “kiss the bullet” thing from Ms. 45, albeit not dressed as a nun. There is a fake nun here, but it’s an undercover policewoman, working the streets in the hope of finding… A coherent plot, I guess?

Det. Brown speaks to this nun-cop and tells her to send Audrey’s landlady into her apartment, adding helpfully, “She should look for something suspicious.” Going over there himself was just too much trouble, it seems – though being in a different film is a credible enough meta-excuse, I suppose. Search warrants? They’re vastly over-rated, too. She duly finds a severed head in the fridge, and the police finally decide it’s worth their while to turn up. Audrey is hearing voices at the party, telling her, “Humans deserve no mercy. Don’t forget… You are Lucifer’s daughter!” and ordering her to kill. Which she duly does, in slow-motion, naturally. The local cops show up, and it goes to freeze-frame, this film having run its course. 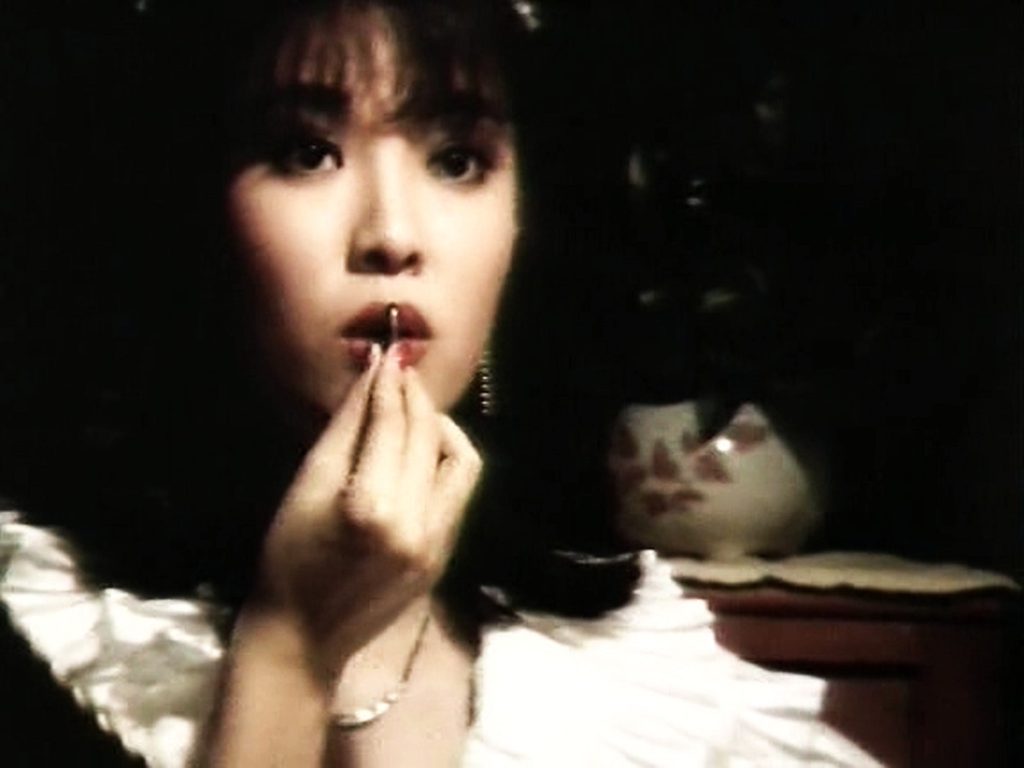 Dr. Oliver and his henchman have had enough of their minions’ failures, and decide to ambush Det. Brown as he drives his van into the forest. Somehow, he knows they’re coming and gets out of the van before they attack. An exciting chase through the forest ensues. Okay, it’s not exciting. And why the cultists are wearing ski-masks, escapes me.  Brown goes get to do his best Harry Callahan impression, asking the last cultist standing, “Now, a question, Breslow. Do I have a bullet in the gun?” Except, unlike Dirty Harry, he doesn’t, because we need the contractually obligated kung-fu fight on the edge of a cliff. Which finishes as you’d expect, and the camera pans away to a random tree. The End.

I have…. questions. I’m not going to claim Girl was some kind of masterpiece, but it was serviceable, and honored its inspiration by wholesale theft. I cannot fathom why Godfrey Ho decided it would be improved with a Satanic subplot. The whole occult thread makes absolutely no sense; it’s never clear what Dr. Oliver and his pals are attempting to do, or quite how removing Taiwanese creeps from the gene pool is serving Lucifer’s purpose. The mediocre martial arts do have some logic, in that they up the action quotient of the original film, which was more in the psycho-thriller genre. However, if I wanted to watch an unofficial remake of Ms. 45, with kung-fu in it… Nah, never mind. Just watch Girl with a Gun instead, or better yet, Ms. 45.