I was drawn to this one simply for novelty reasons. Specifically, seeing Corbett playing a serial killer. I mean, he was part of one of Britain’s most-beloved sitcoms, playing the son in Steptoe & Son, and even Sooty’s best friend, f’heaven’s sake. So I was curious to see this lovable actor killing pin-up models, as part of his character’s twisted campaign of puritanism. However, once I got past that, it’s actually a small gem, and certainly rich in late fifties cultural atmosphere. 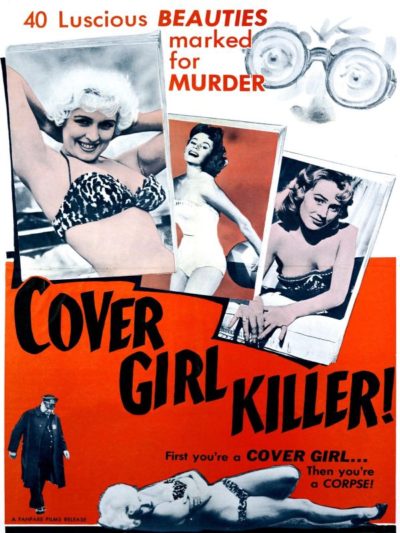 Corbett’s unnamed killer is targetting the cover models for somewhat salacious magazine, Wow!, and arranging their corpses to match the covers. The magazine’s publisher, John Mason (Teakle, who could be Jimmy Carr), is actually an archaeologist (!); he inherited the publication from his uncle, who wanted to loosen the nephew up (!!). He works with Inspector Brunner (Brooks) of Scotland Yard, to track down the remaining models, before the killer does. This doesn’t go well, so the new plan is to set a trap with the next edition’s cover, and keep the model under surveillance until the killer strikes. But for understandable reasons connected to their high mortality rate, volunteers for the cover are hard to find – at least, until John’s showgirl girlfriend, June (Young), bravely steps up and offers to take the job.

What’s nice is the way everyone here seems relatively smart, on both sides. Perhaps too smart in the killer’s case. He dons a deliberately ludicrous disguise, of a bad toupée and Coke-bottle glasses, to ensure that’s all anyone remembers about him. Yet he also shows up in normal guise to the Inspector’s office, pretending the killer was a tenant of his, almost blowing his cool when the detective describes their suspect as “insane”. There’s also an interesting scene where he visits an actors’ agent, to discuss a non-existent movie based on the murders: “You sound doubtful, Mr. Ross. Surely sex and horror are the new gods in this polluted world of so-called entertainment?” Not much has changed in 60+ years, apparently. If that line sounds familiar, it might be because it seems to have inspired one in Frankie Goes To Hollywood’s song, Two Tribes: “Are we living in a land where sex and horror are the new gods?”

Yet it’s actually fairly sympathetic to the models, Mason defending them by saying, “I’d say their morals are as good as anyone’s.” At worst, they’re portrayed as naive, swallowing whatever line the psychopath throws at them, bending them to his will with honeyed promises of TV shows and commercials. June is actually prepared to put her life on the line, leading to an interesting finale where the killer outwits Brunner by sending in a decoy in his disguise, causing the police to pull protection from his target. The deception is discovered just in time, of course. Finally, interesting to note this psychotic photographer pre-dates by a year the much more famous one in Peeping Tom, which largely destroyed Michael Powell’s career. I guess Terry Bishop never had enough of a career to destroy…