Tarantino-esque bullshit is bad enough when it’s Quentin Tarantino who’s doing it. This is Tarantio-esque bullshit, peddled out of the back of a trailer on a dodgy caravan site. It’s the cinematic equivalent of a goldfish won at a third-rare carnival; not worth the effort, and it’s probably going to die in its plastic bag before you get it home anyway. The title character and focus is Pixie (Cooke), a young Irish woman, who talks her ex-boyfriend and his pal into robbing some rural drug dealers of 15 kilos of their product. While that actual crime goes fine, the thieves fall out, and the drugs end up in the custody of naive locals Frank (Hardy) and Harland (McCormack). 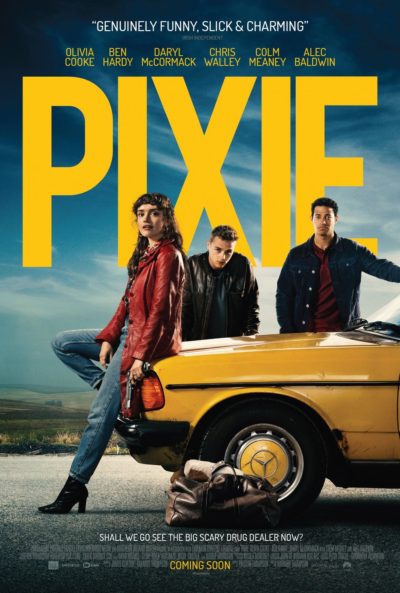 Naturally, neither the drugs’ owners, nor Pixie’s gangster father (Meaney) are too impressed, setting off a pursuit of Pixie and the pair of lads across the Irish countryside, as they try to find a buyer who’ll take them off their hands instead of shooting them. Eventually, the top of the food chain shows up to recover his property. This is Father Hector McGrath, played in cringeworthy fashion by Alec Baldwin. Because that’s the joke here, that Catholic priests are the drug-dealers. I’ll pause, while you can ensure your sides do not split from the uproarious laughter which is no doubt bursting from every orifice at that concept. There. I trust we are ready to move on now?

Thompson seems to be aiming for transplanting The Boondock Saints back to its home country, and that’s a pretty questionable idea to begin with. The film doesn’t seem to have any idea what to do with the characters, as they get chased round the (admittedly, rather pretty and well photographed) Irish countryside. It’s filled with elements which fail to make sense, such as what, exactly, Pixie’s original plan was, if the robbery had played out as intended. Apparently, it involved vanishing off to San Francisco to study art photography, without waiting for the spoils. Instead of explanations, the movie is too busy trying to mix violence and comedy, to awkward effect, while throwing in the most unconvincing threesome in film history. I felt genuinely embarrassed for the participants.

Opening with a caption, “Once Upon a Time in the West… Of Ireland”, it initially seems to be going for an Irish take on that genre – presumably known as a potato Western? However, this is rapidly discarded, in favour of a style which has little to offer of its own, choosing instead to ape Tarantino and Ritchie. At one point, a character (played by Dylan Moran) says, “Was that stupid in your head? Because it was, coming out of your mouth.” Much the same could be said of the script. It prefers to burden itself with dialogue which isn’t as clever as it thinks, and characters who seem little if any less lazy – there’s literally nobody here with a real job – than the dialogue they are made to say.