While Hammer had tinkered with vampire mythology over its preceding entries, this one ripped up the whole rule-book and started fresh. But it makes sense, as this was no longer inspired by the creatures of Bram Stoker’s novel. The source material here was Sheridan Le Fanu’s novella Carmilla, first published in 1872, a full quarter-century before Stoker’s book came out. It had previously been adapted to film in varying degrees, most famously by Roger Vadim in Blood and Roses (1960). Christopher Lee had also appeared in an Italian version, Crypt of the Vampire, in 1963. Hammer, in conjunction with American International, decide to make a version to take advantage of the recently relaxed state of censorship, both in America and the UK.

And, boy, did they. I remember seeing this at the Scala Cinema in the nineties. But it seemed that every protectionist to have screened the 35mm print, had snipped a frame or two out of the juiciest bits. Over the course of 20+ years, that added up, so some scenes now resembled low-quality stop-motion work, if seen at all. While the studio had dipped their toe in the nudity waters previously, this plunged in, head first. For while Carmilla contained its fair share of lesbian subtext, Lovers made it maintext. The movie only escaped major action by the British censors – still nervous about homosexuality – by the studio pointing out its origins in the book. Cuts were still required at the time to a pair of decapitations, and a brief glimpse of Ingrid’s pit, if you know what I mean.

Among other changes, it takes place in a specific geographical location, Styria, unlike the usual, vaguely middle European setting. [Fun fact: Styria is where Arnold Schwarzenegger was born]. Proceedings open with a prologue in which Baron Joachim von Hartog (Wilmer) avenges the death of his daughter at the fangs of the Karnstein clan of vampires. Decades later, in 1790, General Spielsdorf (Peter Cushing, in a small role), is holding a birthday party for his daughter at his lavish house – actually Moor Park Mansion. A Countess (Dawn Addams) shows up with her “daughter” (Pitt), which should set alarm bells ringing for several reasons:

Still, the Countess drops off Marcilla for an extended play-date with the General’s daughter, whose health immediately begins to go into a decline, eventually proving terminal. Moving on, the Countess pulls a similar stunt to get the renamed “Carmilla” into the household of Roger Morton (George Cole, eventually to become famous in TV’s Minder). There, Carmilla sets her toothy sights on daughter Emma (Smith), after seducing Emma’s governess, Mademoiselle Perrodot (O’Mara) into acting as her accomplice.

This is when the film is at its most fun, largely due to the suspicions of house butler Renton (Harvey Hall). He knows what’s up, though his concerns are more about Mme. Perrodot than Carmilla. As Emma begins to decline too, Renton decks out her room with garlic, puts a cross around her neck and calls in the local doctor (Ferdy Mayne). But Carmilla is sinking her fangs into anyone who gets in her way, and the mounting body-count attracts increasing attention. Roger Morton returns to find a pile of corpses, and Carmilla having run off with Emma. Fortunately, Baron Hartog is still alive, and together with Morton and the General, they head to Castle Karnstein and find there was a member of the family the Baron missed.

As mentioned, this makes some significant changes to the legends. These vampires are only slightly discomforted by the sun, rather than collapsing into dust, and show up in mirrors without issue. Some things haven’t changed though: garlic, crosses, and stakes through the heart remain effective. But flipping the gender script makes for some interesting readings. There isn’t even a particular young male lead, and it’s very much pitting unfettered female sexuality against male repressive forces, who seek to enforce traditional roles. When the General is driving a stake into the heart of a lesbian vampiress, the phallic symbolism is almost painfully obvious. He “cures” her of her sickness through the act of violent penetration, and normal i.e. hetero service can be resumed. 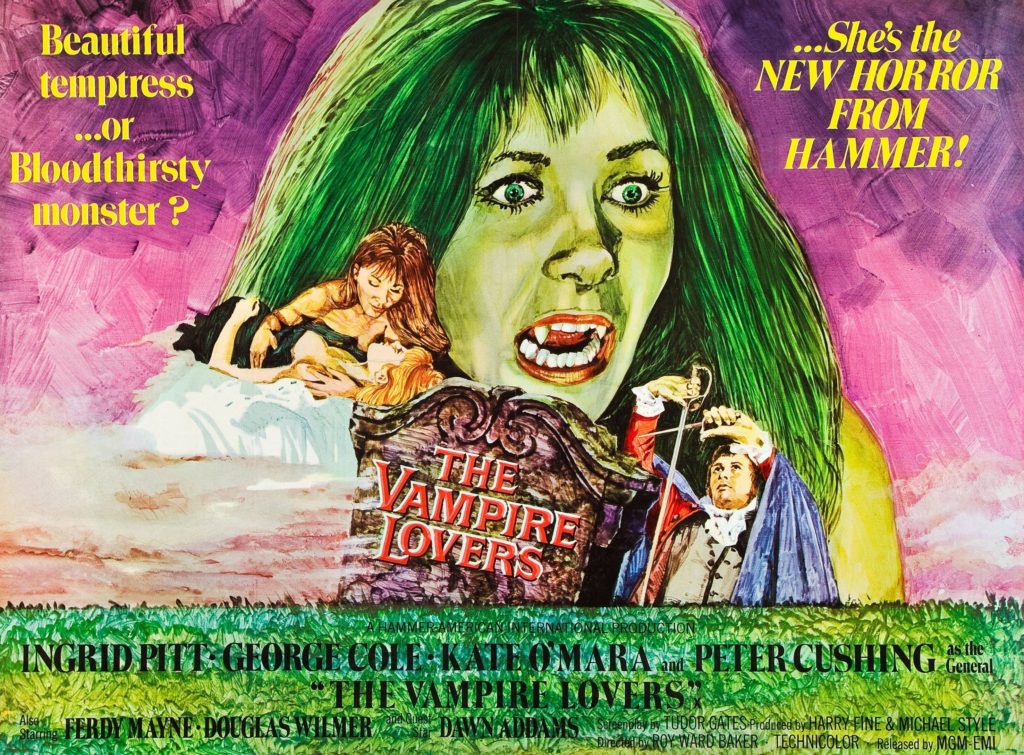 The movie is also surprisingly vampire-centric. I’ve been used to their films having Christopher Lee show up for only a few minutes, with the focus firmly on the humans. Here, though, Mircalla is front and center; Pitt may get more screen time than Lee in any of his films, save perhaps the original Dracula. She may not have great dramatic range, yet she’s well-cast here and benefits from an excellent ensemble cast around her. I’ve name-checked a few above, but just about everyone is very good in their roles, even down to the local inn-keeper – who, for once, is surprisingly not played by Michael Ripper. Then there’s the glorious story Pitt tells about her teeth repeatedly falling into O’Mara’s cleavage: “The crew happily begged to assist in finding these fangs… Everyone wanted to retrieve them”. Eventually, they reportedly had to be held in place with chewing gum.

I do have one issue. There are some scenes involving a mysterious man in a cloak (which is just fabulous), whose presence or purpose is never explained. At the end, he simply rides off into the sunset. Perhaps he will unleash other Karnsteins, such as Lacrimal, Camarill and the OCD member of the family, Aacillmr… This dangling thread is one of the few missteps in a film which is a lot of fun, fresh and invigorating in the way it breathes new life into the old standard.  Though “Not for the mentally immature”, as the US poster claims? Hmmm. Not quite so sure the film is really as high-minded as that implies…