British giant monster movies are a poor selection, though this is probably unsurprising, considering we don’t have much nature to be scared of. The largest carnivore found in the United Kingdom is… er, the badger. And as the meme goes, our version doesn’t exactly pose much of a threat. This may explain why British monster movies are largely a bit shit. Gorgo and Konga are the best-known of these underwhelming entities; this may be the first example, and is little if any improvement. Lourié, who also directed Konga, was best known for The Beast from 20,000 Fathoms, perhaps Ray Harryhausen’s breakout movie. Here, he worked with Harryhausen’s mentor, Willis O’Brien, who had worked on 1933’s King Kong. Sadly, it doesn’t appear O’Brien had learned much over the intervening quarter century. 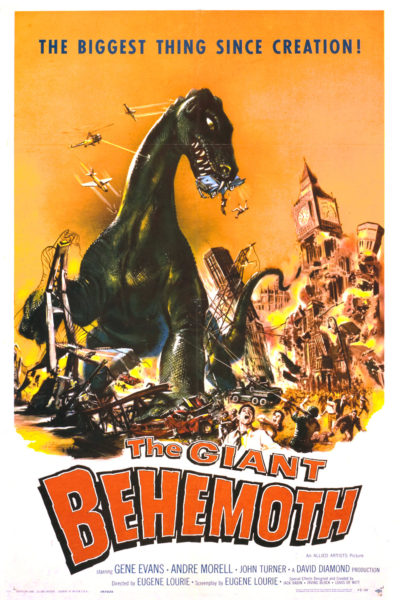 This does, in some ways, evoke the Quatermass films made by Hammer around this time, such as The Quatermass Xperiment. [Interestingly, Morell later portrayed Quatermass on TV] Like that movie, we have an American guest star (Evans), playing a scientist working in Britain, who has to battle a severe natural threat, while also handling disbelievers who won’t take him seriously. The latter is much less a problem here, with Her Majesty’s bureaucracy a positively well-oiled machine. This being the fifties, the threat is the result of nuclear testing, which has resurrected an ancient dinosaur, enlarged it enormously, and given it the ability to explode helicopters with the power of its lizard mind, before rampaging through the streets of dockland London.

Again: this was the fifties, when radiation pretty much had whatever miraculous powers scriptwriters wanted. Do not get me started on the biblical references either. The sea-monster in the book of Job was actually Leviathan, not Behemoth. And what other kind of behemoth would there be, except a giant one? All pedantry aside, this is a rather plodding and pedestrian production, which spends an excessive amount of time on things such as, taking photographs of dead fish. Maybe audiences in the fifties were thrilled by the process of scientific discovery? I was less than enthralled, and if you’re here purely for the monster mash, you should be aware the creature doesn’t get seen properly until the last half-hour, and gets barely seven minutes of screen time.

I think part of the problem is, everyone is too calm. I mean, there’s a 70-foot tall dinosaur roaming London, and the government has just carried out the least effective evacuation ever, going by the crowds of people in the streets. Now, they are a bit panicked, admittedly, but neither Evans’s Steve Karnes nor his British colleague, Prof. Bickford (Morell) seem more than mildly annoyed at the situation. They deal with the behemoth, in much the same way you feel they’d address a ship stuck in a canal. The only person who seems genuinely to care is a paleontologist who shows up midway, and he doesn’t last long, being in the exploding helicopter mentioned above. If the central characters can’t be bothered, really, there’s probably little reason for the viewer to be.