I previously documented my diversion to another film by the same name, which I mistook for this one. Not for the first time this year, the “imposter”, while no great shakes, turned out to be at least somewhat more watchable than the intended target. As with the other Wonder Valley, this sees four friends head out of the city for a weekend trip to the titular location. [Wikipedia tells me this is approximately 10 miles east of the city of Twentynine Palms. It’s never a good sign when I am looking up Wikipedia while a film is in progress] In both, wandering the desert and bad stuff ensues. Though in this case, at least nobody gets eaten. I think. Though as any and everything experienced here may be the result of them ingesting “moonflowers” on their first night, I am unwilling to commit fully. 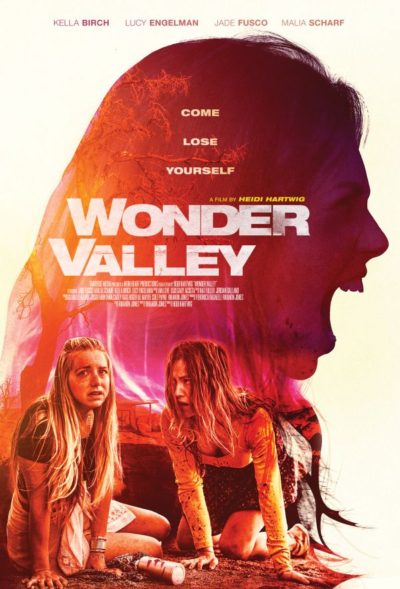 The four women here are basic, broad archetypes, so different that you wonder how the hell their friendship ever developed. They certainly don’t seem to like each other much. There’s sensitive flower child Cloudy (Engleman); actress bitch Sasha (Scharf); outsider and loner Karian (Fusco); and, to quote Margaret Cho, “then there’s the ho,” Jessica (Birch). The bickering among them is painful to the ears. In terms of story, what you get is Karian, whose late aunt’s house it is – the owner committed suicide in it, a fact conveniently not mentioned beforehand – seeing a near-dead girl during a hike. Jessica and Sasha are disdainful, but Cloudy agrees to go back into the desert and help Karian look for the victim. I don’t blame her: 10 minutes with the other two, and I’d want to pull a Captain Oates as well. Two unprepared city girls, still tripping balls, go on a desert hike. What could possibly go wrong?

I will say, this is actually better photographed than the other Wonder Valley, with crisp images that make good use of light and dark, without leaving the viewer peering into the gloom, trying to figure out what the hell is going on. No, here the viewer is left peering into the script, trying to figure out what the hell is going on. The answer appears to be little or nothing, for at least the first hour. Watching unappealing people argue, take drugs and suffer a psychotic breakdown for no particular reason, is of quite limited appeal. That’s especially the case when the performances are no great shakes. Scharf perhaps comes off the best: while still a one-note portrayal, at least her character appears intended to be incredibly annoying.

The odd thing is, the last five minutes, impenetrable though they certainly are, are perhaps the most intriguing the film has to offer. I’d not be prepared to offer a definitive opinion on what’s going, admittedly. However, they hint at a better film happening just outside the confines of this one. Combine the best elements of the two Wonder Valleys and you’d likely end up with one semi-competent entity.